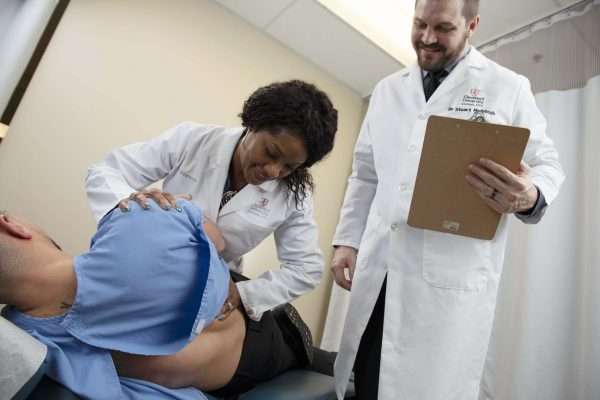 Becoming a Chiropractor: What is an Evidence-based Practice?

Answering the question “What is an evidence-based practice?” shows that scientific research findings are finally catching up with what millions in the U.S. and around the world already know: chiropractic is effective. In becoming a chiropractor, you’re choosing a healthcare profession in which 97% of people who’ve used chiropractic care would use it again for neck, back, and other musculoskeletal pain.

Evidence-based research comes from reputable sources and recent surveys. They are universal in their support for first turning to conservative solutions such as chiropractic treatments:

These findings are good news. Musculoskeletal disorders affect nearly 40 million U.S. citizens yearly and have an annual estimated cost of more than $268 billion. For low back pain, treatment by a Doctor of Chiropractic costs 20% less than traditional care, according to the American Chiropractic Association.

What is an Evidence-based Practice?

Evidence-based practice means the doctor of chiropractic fully understands the patient’s needs, values, and preferences and then applies the right clinical treatments indicated by the newest evidence-based research.

One way to think about a practice that follows an EBP philosophy is that it helps ensure the best-possible practitioner-patient relationship, which contributes to better patient outcomes. Aspects of the EBP philosophy include:

It’s a Great Time to Become a Doctor of Chiropractic

A Doctor of Chiropractic’s goal is to restore and improve the quality of life in natural ways – without surgery, invasive procedures, and prescription medicines. Patient health is optimized by emphasizing proper nutrition, regular exercise, stress management, and a focus on spinal and extremity joint biomechanics.

Like optometrists and dentists, doctors of chiropractic are primary, portal-of-entry health care providers meaning that you do not need a referral to schedule an appointment. Today, the vast majority of health insurance plans cover initial chiropractic care, including Medicare and the U.S. armed forces’ Tricare plans.

Also, the number of multi-disciplinary, collaborative medical offices continues to grow. This new type of doctor’s office promotes referrals among chiropractors, M.D.s, and other physician specialties. Becoming a chiropractor offers an exciting future.

CUKC has been a pioneer in the health sciences for nearly 100 years and is recognized as one of the oldest chiropractic colleges in the nation. CUKC is also the only chiropractic school still under the guidance of its founding family. Dr. Carl S. Cleveland, CUKC president, is a fourth-generation chiropractor.

At CUKC, becoming a chiropractor can be accomplished in just 3.3 years (10 trimesters). The CUKC Doctor of Chiropractic degree program is completed on the CUKC campus and in Kansas City area clinical settings. Highly disciplined students may also choose the Concurrent B.S./D.C. degree option, earning aB.S. in Human Biology while concurrently enrolled in the Doctor of Chiropractic program.

Qualified applicants can enter the program in September, January, or May of each year.

Knowing “What is an evidence-based practice?” is only part of the story about becoming a chiropractor. Request information today or download this new, free eBook: Your Complete Guide to the Chiropractic Profession.