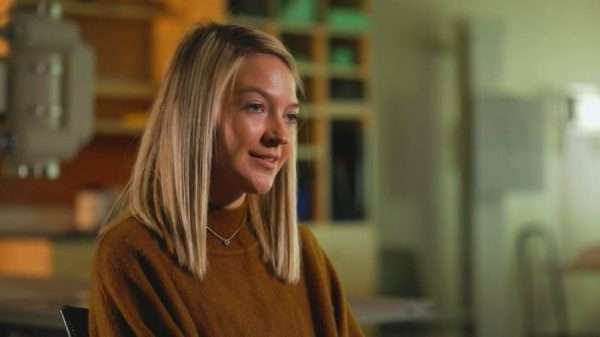 What can a person do when a career in healthcare sounds interesting, but being a doctor or a nurse holds no appeal? If you look a little deeper, you’ll find there are a multitude of ways to make an impact in healthcare that go beyond those two most commonly known roles. That’s what Abigail Loudon did, and she found the ideal career for her: a radiologic technologist – commonly known as a radiographer or a “rad tech.”

Loudon graduated from Cleveland University-Kansas City (CUKC) in 2019 with an Associate of Applied Science degree in Radiologic Technology. She now takes X-rays each day and enjoys her role in one of the most essential parts of the healthcare spectrum. From broken bones to injured organs, the diagnostic images she captures, play an integral part in the care people receive every day. But her decision to pursue rad tech was not an easy one.

While in high school, Loudon was beginning to discover her strengths, but she wasn’t sure how all of her interests could work together. She enjoyed teaching people new things and helping others, especially children, but she was also interested in healthcare. She became even more intrigued after being involved with a professional studies program during her senior year.

Loudon’s interest might not have taken flight had it not been for that program. It allowed her to explore different medical careers to see if there was a path that was right for her. For a time, she considered nursing, but she knew that wasn’t the right fit. She struggled to find the right career until it found her. It was a role where she could help people and still make an impact — digital imaging.

“We spent six months (job) shadowing throughout different hospitals, and the last semester we spent doing an internship,” Loudon said. “But, whenever I got to shadow, I saw radiography a few times, and that’s what stuck with me the most.”

Loudon said she finds radiologic technology appealing because it offers something new every day. As a rad tech, she faces a variety of patient situations, from sickness to trauma, which allows her to sharpen her skill set continually. Beyond the health concern the patient is experiencing, Loudon must also consider their size and body composition, which can have an impact on the images she takes.

The medical field can be hectic. While the doctors with whom she works need quality diagnostic images promptly, Loudon tries to balance that with what her patients usually need, which is kindness and compassion. She says a positive attitude can help make a difference for her patients, even if they are struggling with a health issue.

“Most people, when they come to get an X-ray, aren’t crazy about the idea because they’re in pain – they just don’t want to get it done,” Loudon said. “So being able to cheer them up a little bit while they’re getting it done keeps me motivated.”

While the adult patients have their issues, children are especially challenging because they are often petrified of their surroundings and the equipment she uses. To combat those fears, she tries to speak with them in a way they can easily understand. It is then that she teaches others.

“With kids, it’s always kind of tricky because they don’t really know, they’re usually scared because they think it’s going to hurt,” Loudon said. “So, I’ll kind of turn on the X-ray light and just show them it’s just a big camera and say, “‘We’re going to take a picture of you,’” and that kind of helps them calm down a little bit.”

And children are not the only ones who struggle with radiography. Loudon encounters that same uneasiness with some of her geriatric patients. She implements a similar strategy to help ease their anxiety by explaining the X-rays are needed to help diagnose their issue. She reminds them that it’s a vital part of assisting the doctors in treating them effectively, which usually eases their agitation somewhat.

When reflecting on her time at CUKC, Loudon was effusive in her praise, calling her instructors outstanding. Their efforts, along with the off-site experience she gained while meeting her fieldwork requirements, slowly led to changes that prepared her to be the difference in healthcare.

“The best part of my academic experience while at CUKC was probably seeing myself grow,” Loudon said. “Just from the start of clinicals, we only knew a little bit, and by the end, when I was finishing up, I was able to do the exams myself. So, just seeing myself grow in confidence.”

Loudon gets to interact with patients while playing an essential role in the healthcare process. When taking X-rays of various injuries and conditions, she is constantly challenged with something new. She uses that to enlighten her patients about the importance of what her images can reveal to the physician.

“Whether it’s a car wreck, problems breathing, or anything like that, X-rays are usually the first thing that can help diagnose something,” Loudon said. “So, I think it’s very important that people know more about them because a lot of people don’t really know fully what they can help to detect.”

Perhaps most importantly, she educates people during their time of need, which helps to calm those who may be confused about why diagnostic images are needed. CUKC students receive instruction in communicating with diverse populations, understanding best practices in customer satisfaction, and refining their critical thinking skills when facing traumatic injuries.

Being forthcoming with information allows Loudon to build a bond of trust with her patients during the few minutes she is with them. Sometimes that makes all the difference to a patient under extreme stress.

Prior to starting her rad tech program at CUKC, Loudon was familiar with X-rays, but she knew little about those who worked in digital imaging. She thought she had a singular career possibility in mind, and then she discovered that radiography could lead to a whole new world of possibilities.

“When I first started looking into radiology, ultrasound is actually what I wanted to do, but being able to shadow helps you find out the different careers you can go into within the field,” Loudon said.

The time she spent shadowing served her well, and it led her to the Radiologic Technology degree program at CUKC. But even then, Loudon still wasn’t entirely sure about all of the various aspects of the career before starting her degree. She soon learned that rad techs do many things, including joining doctors in surgery to capture live images as needed.

By earning her degree in radiologic technology, Loudon has positioned herself well for the future. It has broadened her career options by allowing her to begin an imaging education that will serve as a foundation for other digital imaging positions in the years ahead.

“Once you get registered in X-ray, you can move on to more modalities, so CT/CAT scan, that interests me,” Loudon said. “I’d like to go into that or mammography, and I’ve also looked into radiation therapy a little bit. So, doing another program like that would be interesting.”

Radiography is considered a major entry point to a career in digital imaging, and many radiologic technologists expand their employment potential by earning additional credentials. This allows a rad tech to enjoy a tremendous amount of career flexibility. Here are a few of the more common modalities.

Following one of these certifications, an imaging career can continue into post-primary pathways like computed tomography (CT), bone densitometry (BD), vascular sonography (VS), and cardiac interventional radiography (CI).