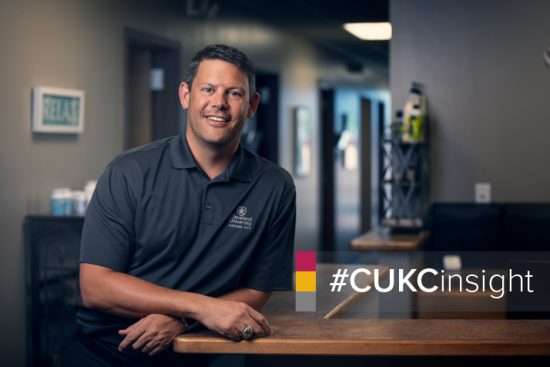 No matter how far we travel from our roots, the way we were raised always stays with us. This is particularly true for those from less populated areas, where honesty, loyalty, and respect are the cornerstones of doing business. Those who grow up in small-town America often find that it dramatically shapes the personal and professional relationships they develop as adults.

Dr. Patrick Hammond believes strongly in that notion because that’s his story. And it impressed upon him two concepts that still drive his professional life today. He learned that nothing is gained without serious effort and treating others as he would like to be treated is a key ingredient to success. The translation? Work hard and treat people right.

Hammond was raised in Bethany, Mo., a community of 3,000 people located midway between Kansas City and Des Moines on Interstate 35. While attending school, he played sports and had thoughts about pursuing a career in education. A basketball injury when he was 18 left him hobbled with back pain. A door to a new career path opened after a visit to a chiropractor returned him to good health.

After graduating from the College of Chiropractic at Cleveland University-Kansas City (CUKC) in 1997, he served as an associate chiropractor for four years before opening Hammond Chiropractic Center in Shawnee, Kan. His recollections of small-town values remain a guiding force in his practice when it comes to interacting with patients. It involves not only being fair, but also treating them “ethically, and morally correct,” Hammond said.

This mindset was reinforced for Hammond when a patient suggested a book to him. The title of the text was How to Win Friends and Influence People, by Dale Carnegie. The words of the renowned relationship expert changed Hammond’s entire perspective and took him to the next level professionally.

“I found that up to that point, I was taking care of patients, but I wasn’t thinking about them as much as I was myself,” Hammond said. “And what that book taught me was that the most important thing to everybody is them. Make it about them and what they want to do. And once I did that and tied that principle into my practice, it really helped my growth pattern.”

Although his discovery of the Carnegie book enhanced his practice after he began, there was no substitute for hard work during the early days. Hammond had worked four years as an associate chiropractor for 1984 CUKC alumnus, Dr. Peter Young. During that time, Hammond became familiar with running a business, but he said it’s much different when you’re starting your own.

“Even though I’d worked as an associate, there was still a big learning curve,” Hammond said.
“I got good at treating patients, and I gained a little bit more knowledge on the business side of things. But then, when you have to go out there and do it, it was a little more challenging than I thought.”

When he went out on his own, Hammond grappled with the multitude of things that come with business ownership. He wanted to start strong, but his budget limited him. He faced the uncertainty of how much time and money to invest in marketing, community involvement, and equipment, not to mention the cost of payroll, rent, and other miscellaneous expenses.

A “less is more” approach is beneficial in many ways, and Hammond is not only a proponent, but he can speak from experience. When he opened his business, his equipment and furnishings may not have been fancy, but they were functional.

“When I first started, the only thing I had new in my office was a computer; everything else I had was borrowed,” Hammond said. “I got used equipment, used office furniture, and a used copier from a friend of mine.”

Admittedly, Hammond said his finances were sparse, so when it came to keeping costs low, he didn’t have much choice in the matter. As a result, he launched his practice with two tables, two E-stem machines, an intersegmental traction table, and four chairs in the waiting room.

As he began building his practice, Hammond quickly learned how challenging it would be. Even with four years of experience, he was practically starting over from ground zero. In those early days, with only a handful of patients and few resources, it was a struggle. However, his support system was strong, and he was uplifted by those whose faith in him never wavered.

“When I first opened my practice, I’d been married about a year. My wife, fortunately, had a great job, and she believed in me. And I think she believed in me more than I believed in myself. So, her daily encouragement really helped me out, especially during the times when I’d come home, and I had only three patients or six patients. And then all of a sudden, she’s like, “‘Yeah, just keep going. You’re good at what you do. They’re going to believe in you. They’re going to follow you. Don’t worry.’”

The impact of that kind of support is immeasurable. It steels the resolve and creates positive energy. Hammond stayed confident and began stretching his marketing dollars as much as he could. And when funds are low, the best kind of marketing is the free kind, so he sought out events where he could connect with potential patients with little to no cost.

“I would go to runs and do screenings, and I would go to gyms,” Hammond said. “I just went any place I could get myself in front of people that didn’t cost me any money.”

Although these activities did not require a cash investment, Hammond did have to invest his time…lots of it. The first three years after opening, he worked seven days a week to promote his practice. Whether it was a speaking engagement, a sporting event, or a home show, each was instrumental to his success. And nothing was more important than networking, which he started right after his graduation from CUKC.

During his associateship, Hammond began laying the foundation for his work with local sports teams. The owner of the practice where Hammond worked knew the head coach of the Kansas City Comets soccer team and recommended him for their chiropractic care. At that time, the Comets played at Kemper Arena, which was also the venue for an ABA basketball team, whom he began treating because he knew people at the arena. A former Comets player became affiliated with the Kansas City Brigade arena football team, which opened another door for him.

Some of Hammond’s earliest connections now work at concert venues, which have provided some unique experiences. He sometimes treats performers at Sprint Center, Kansas City’s premier entertainment venue. He always maintains a level of professionalism, but there have been certain instances when he has become a bit star-struck when treating entertainers.

“There was a specific rock star that I grew up listening to, so that was probably my highlight,” Hammond said. “And when I met him, I was like, “‘Oh my gosh!’” But he wanted to talk to me about his neck, his upper back, and his fingers going numb. And I’m like, “‘Yeah, OK. I guess we can talk about that.’” That’s not really what I wanted to talk about, but it was still enjoyable to experience it.”

While having the right contacts is beneficial, business success sometimes involves a bit of luck, and some patience, too. Early in his career, Hammond began treating someone in management with the Kansas City Royals. Over time, they began to discuss chiropractic care for the players, and eventually, when he learned the club had no chiropractor on staff, Hammond offered his services. They accepted his offer, and he has worked with the team since 2002.

He is humble about his sports affiliations, and Hammond understands that his work with a professional team does come with a certain prestige that benefits his practice.

“I don’t really play into that a lot, but I think for my patient base, one of the separating points between another doctor down the road and me is, well, this guy takes care of a professional baseball team, so people just automatically feel like, “‘Well, if they (the Royals) can trust him, I think I can, too.’” So, it does separate my practice from other people. To me, I’m just taking care of another patient, who just happens to be a professional baseball player.”

His association with the team also allowed Hammond to serve as the chiropractic consultant for the 2012 MLB All-Star Game held in Kansas City. The gathering of baseball’s elite stars was an opportunity to meet future Hall of Fame players while representing the Royals organization. Hammond called that event one of the biggest honors of his professional career.

After 16 years of owning a business, Hammond has seen his practice grow exponentially. But, even though he has enjoyed great success, he doesn’t take anything for granted. Even now, he still believes one of the best ingredients for practice success is networking. It’s a great way to share the message of chiropractic while broadening a patient base.

“I think a lot of people when their practice gets to a point, they sit back and just put it on cruise control,” Hammond said. “Some people can do that, but I’m just not wired that way. I always feel like I need to be out there meeting people and talking to them.”

And one way he maintains his connection with people is by giving back. Hammond is active in local civic groups and organizations in his local community, but it goes beyond that. He has also remained very involved at CUKC, serving in various capacities with the alumni association for more than a decade, and he is chairman of the CUKC Board of Trustees. He simply believes that he has to give back to the place that gave him his career, and he encourages others to do the same. And it’s not just about giving money.

“If you can come back (to CUKC) and tell your story, just start with that,” Hammond said. “There’s so much to learn from teaching others. But also, those students can gain from your knowledge, and your lessons learned throughout practice and life. And then, if you feel obligated or feel it necessary to give a little financial contribution, I think it’s a nice thing to give back to the University.”

Hammond stressed that if you still have connections with individuals on campus, reach out to them and let them know you want to get involved. Whether it’s a faculty member, administrator, or even a staff member, all connections can help you get re-engaged with the institution. Sharing your story today could shape the career success for the practitioners of tomorrow.

The road to success in life is sometimes long and filled with uncertainty. For Hammond, that road will be forever linked to his time at CUKC. Like his small-town roots, his alma mater remains a part of him, too. It stays with him because where it all began has shaped what his professional life has become.

“I truly believed in the education I received at Cleveland,” Hammond said. “I put all my trust and faith in that. And it worked out pretty well for me.”