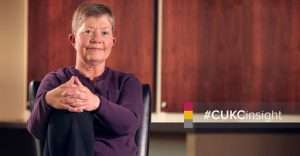 We take our days in measured time following the path that is right for us. Our movement through the different stages of our lives are not always clearly defined, but we press on. We take what life gives us, but only until we decide that we want something more.

Dr. Debra Robertson-Moore, an associate professor at Cleveland University-Kansas City (CUKC) is a good example of that philosophy. The path to her career was guided by two events in different stages of her life. And sometimes it’s the unexpected, fortuitous events for which we are most grateful, as they can override the hindrances of head and heart and lead us to the road we were meant to travel.

The path for Robertson-Moore led to CUKC, where she graduated in 1996 with her bachelor’s and Doctor of Chiropractic degrees. It led her back again in 2003 when she joined the faculty. All of this happened just when it needed to, but not until life showed her a few things first.

“Becoming the person that I knew I needed to be”

At 20-years-old, Debra Robertson was engaged and getting ready to live out her idea of the American dream. She planned to marry, perhaps start a family, and then settle in to whatever else life had to offer. But not long before the wedding, she began to have doubts about those plans.

In a moment of clarity, it became apparent that while she loved her fiancé, she wasn’t in love with him, so she cancelled the engagement. It was the first step in a new stage of her life.

“I realized I was making a choice that wasn’t what was best for me,” Robertson-Moore said. “And from that point, I decided to begin educating myself and really becoming the person that I knew I needed to be.”

Robertson-Moore eventually enrolled in college, becoming part of the first generation in her family to pursue higher education. She studied psychology and was content to work on her career, which is exactly what she did for the next several years. But just when she thought she had her life plan in place, an unanticipated event would redirect her to the next stage of life.

In her early 30s, Robertson-Moore was injured in an automobile accident. As a result of the collision, she was afflicted with chronic headaches. A friend suggested that she see a chiropractor, and when she pursued that option, it delivered her to the career for which she was destined.

“I started going to a chiropractor,” Robertson-Moore said. “And in six to eight weeks, I went from having daily headaches to one every two weeks, so it was a huge difference. I was just amazed. I had no idea that there could be such a big difference from pain to no pain, and with no meds.”

At the time, Robertson-Moore was an undergraduate studying psychology, but during her doctor visits, she peppered her chiropractor with questions about his profession. At every turn, she asked why he did this, and his methodology for that, constantly seeking to learn more about the treatment that had brought her relief. So numerous were her queries that her practitioner finally encouraged her to explore chiropractic as a potential career opportunity.

Calling her response to care, “phenomenal,” Robertson-Moore began to look beyond how chiropractic might be able to impact not only her recovery, but the rest of her life. She changed her field of study from psychology to biology to better understand the body. On the advice of her doctor, she visited chiropractic schools to see if a career in chiropractic seemed like a good fit for her, and if she wanted to pursue it. It was, she did, and so it was on to CUKC for the next stage of her life.

A New Career and Beyond

Chiropractic college was illuminating for her. After personally experiencing the benefits of chiropractic care, Robertson-Moore was determined to learn all she could about the profession. She was a voracious learner to say the least.

“I’m tenacious. I envision myself as a human pit bull,” Robertson-Moore said. “I snag on, and I don’t let go until I get something addressed, and that serves me well.”

During her time at CUKC, she was known for asking numerous questions of her instructors and clinicians. This was not to be a nuisance, it was because she genuinely wanted to be as knowledgeable as possible about her chosen field. Her constant search for a deeper understanding of the curriculum was necessary so that she could serve her patients better.

Robertson-Moore graduated from the University in 1996 and opened her own chiropractic practice. She already had several years of business experience prior to chiropractic college, so that was nothing new to her.

“When I first got out of school, I opened up from the ground up. I started from a sole proprietor. I had a 12-15-year history of working in business, so I was not at all worried about business. I understood the difference between debits and credits, I had dealt with lawyers, and I had a good understanding of that. So, for me, there was not a problem stepping into the business side of it. I found that I didn’t get a lot of joy out of running a business.”

Helping others is what she wanted to do, but without the business aspect.

How could she achieve that with her chiropractic experience? Serendipity eventually played a key role in what would be the next stage of her career. An employment opportunity became available at CUKC in 2003, so she joined the faculty at her alma mater and never looked back. Now with the University for more than 15 years in the classroom and serving as a clinician, she has found the place that offers her the perfect blend of what she enjoys most, chiropractic, teaching and helping others.

Robertson-Moore now finds herself engaged in a variety of activities each day. She teaches two diagnostic classes and also stays extremely busy with the Electronic Health Records (EHR) system at CUKC. She is the coordinator of the EHR system, which is an electronic archive of patient records to eliminate paper files. She handles training for new users and implements system upgrades.

Helping others is obviously not foreign to Robertson-Moore, and she, too, had to rely on others.She knows what pain feels like because she’s endured her fair share. But she is an example of the good that chiropractic can do not only after an accident, but also for chronic issues that have afflicted her over time.

“Dealing with low back pain as I’ve gotten older…I’ve had that,” Robertson-Moore said. “I’ve had to go through back surgery. And if it wasn’t for chiropractic, I would not be functional. I’m very thankful for the blessings it afforded me personally.”

Although a doctor herself, it’s the times when Robertson-Moore has been the patient that allow her to share common ground with many who seek chiropractic care. A sympathetic ear for those who may believe that there is no relief in sight, she understands what they are facing.

And having the ability to eliminate the discomfort of others during her career has brought her great satisfaction.

“I am most proud of being able to help others alleviate physical pain throughout the years,” Robertson-Moore said. “Daily pain sucks; it wears a person down. To be able to ease or remove that for others is a most positive force in this world – it’s a natural high.”

Robertson-Moore’s passion for her profession is matched by her desire to share it with others. To do that, she stays committed to her own self-development. She asks a lot of her students, because she demands a lot of herself.

“I like to grow, I like to evolve. I like to improve,” Robertson-Moore said. “And working in this environment with these people, provides the perfect scenario for me to be able to grow. And if I can grow professionally, it promotes me growing personally and vice versa.”

And Robertson-Moore believes that students enrolled in the Doctor of Chiropractic (D.C.) degree program at CUKC get invaluable professional guidance from their mentors. One of the appealing things about the D.C. program is the way the foundational bonds with faculty are started early in the program. This is something that Robertson-Moore champions about the educational model at CUKC. Having a connection with an instructor in the classroom makes it easier to work with that person in a clinical setting.

“One of the biggest strengths that I see about this university is the fact that our students get a chance to start meeting clinical faculty on day one, and that is huge,” Robertson-Moore said. “If you have people in the clinic that you’re comfortable with you can say ‘You know, I can go ask him or her, it doesn’t matter if I sound like an idiot,’ that’s phenomenally important, and it helps to facilitate your clinic experience.”

Part of the overarching theme at CUKC is that student success is paramount. If extra time is needed with a faculty member, extra time is granted, because there are never too many questions. Whether it’s academic or professional guidance, becoming part of the Cleveland family at CUKC is not just wordplay, it’s a bond that really does occur. That kind of support is usually comforting for a student’s biological family.

“We actually care about how our students do,” Robertson-Moore said. “And that’s huge, especially if you’re sending your child out-of-state, we care. That’s important. It’s hard to find that in this environment – in this world.”

Aiming for a Life With “More”

Robertson-Moore has seen what chiropractic has done for the health of others, as well as what it’s done in her own life. The awesome power the profession has to change lives on so many levels is the reason why it matters so much. She continues to be a strong advocate for all that it can do for those who open their mind to a natural solution for pain and suffering.

“Chiropractic is very important,” Robertson-Moore said. “From a personal perspective, I wouldn’t be able to function because of my own neuromuscular skeletal issues. It’s important from the perspective of choice. We get to choose how our bodies ultimately function. We can’t control genetics, but we can certainly control our attitude. We can control what we build into our lives, and every day I look forward to what I do because of what I’ve received from this field.”

“I figure as long as I’m here, the Divine still has more in store for me, and I have more to learn,” Robertson-Moore said. “I look at the fact that life is a school, so I apply that in everything: professionally, personally, emotionally and spiritually. And everybody that my life touches, I feel I have lessons to learn, or I have the ability to be able to offer something, so that keeps me motivated.”

Catch Dr. Robertson-Moore’s “One Big Thing” in this 30-second clip