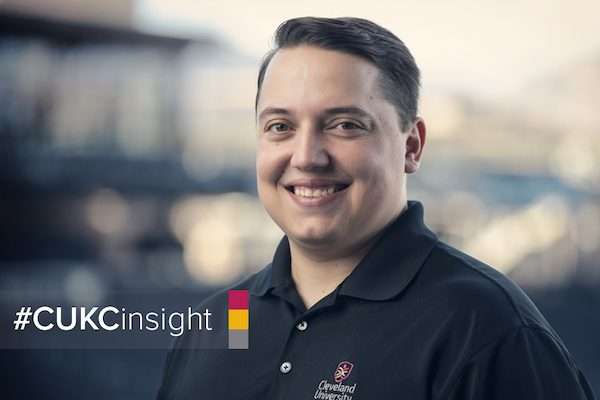 Dr. A. J. Hernandez grew up in Las Vegas, dreaming of playing Major League Baseball. He lived and breathed it 24/7. He worked hard, and as a high school freshman, he made the varsity team. He went on to play in college at the University of Nevada, Las Vegas (UNLV). Throughout his years of competition, he saw many teammates overwork their bodies, and then mask their pain with acetaminophen.

Not wanting to simply mask his pain, Hernandez always relied heavily on chiropractic care to treat his injuries, and to preserve his body. It worked. He never had surgery for any of the problems common to those who play baseball for many years. When it became clear that playing in the major leagues would not be in his future, he needed a new direction. He headed east, to Cleveland University-Kansas City (CUKC) to attend chiropractic college. He graduated in 2019 and now has a practice in Las Vegas.

Q: Most people can trace their professional path back to a specific incident. What made you pursue a path to become a chiropractor?

A. The experience that determined my path to chiropractic was in high school. I had a really bad leg injury, to the point that I couldn’t even walk. I got wheelchaired out of school, and had to go straight to the ER. They did blood work, trying to figure out what was wrong,and it just turned out to be a really bad muscle strain, to where I couldn’t bend it. It was just straight all the time. Working with a chiropractor loosened it up, and I’ve continued to use chiropractic since then.

Q: You played baseball in high school and college; share how chiropractic played a part in your sports health routine?

A. I went through a series of “dead arm” episodes where I couldn’t even throw the ball four feet I had no idea what was going on, so I went to the chiropractor, and I it helped me out with that, big time. And yeah, I mean that’s just what made sense, always to go for the root cause, and be on top of it before it got into a bigger problem. It usually freaks people out when they say, “Oh, you were a baseball player, and you don’t have any shoulder issues, or anything like that?” I say, “Nope. I got through it going to the chiropractor.”

Q: You’re from Las Vegas, how did you end up attending chiropractic college at CUKC?

A. The doctor that I go to in Las Vegas went to CUKC, and he was telling me how great it was. So, I took a tour just on a whim, and it was just great! People were so nice. It really was like a family-type feeling around the campus, and around Overland Park, (Kan.) When I went to the University, I immediately met two mentors who were going through the program. I talked to them, asked questions, and they hooked us up with everything that we needed to know, where to stay, and the best places to go. And so, being there and seeing how family-oriented the city was, and how it was a close-knit family at CUKC, was really cool. I took the tour, and then the next day, sent my transcripts and started the admissions process. I just looked at my mom and said, “Well, I’m moving to Kansas City.” Yeah, it was an exciting time.

Q: Coming out of chiropractic college, you had planned to work for another chiropractor as associate. How did that plan change?

A. The idea of being an associate in someone’s practice and having a job right away was really exciting. In school, I always had that vision of going to work with this doctor, and that’s what I was going to do. And then having great and persistent friends, they kept saying, “A.J., we believe that you can do this on your own.” And that sparked a little light in the back of my head, and going through school, it started shining a little bit brighter. As I went through my preceptorship and graduation, I sat down and began to think “OK, I think I can do this.” And graduation day was the first time I said, “Yeah, I’m going out on my own.”

Q: What’s the reaction when you introduce yourself for the first time as a chiropractor?

A. I still think that people who know me see me as 16-year-old A.J., because before, it was, “I’m A.J. the baseball player.” But now, being Dr. Hernandez, or Dr. A.J., it’s an awesome title to have. I take a lot of pride in conveying my message of what I think chiropractic is, and my way of how you should treat people, and handle your business. So, yeah, it’s exciting, and it’s a lot of fun.

Q: What is your chiropractic philosophy and the benefits of care?

A. My philosophy with chiropractic always goes back to being an athlete, and knowing that if there was a certain area in your body that wasn’t moving the proper way, you should address the issue from the root cause. So, it’s definitely the biomechanics side of it. The vertebrae — or even an extremity — need to be able to move in any direction that’s necessary, and it needs to be able to move in the proper way. I’m a very hands-on person, so my biggest thing is just getting the body moving and healthy in the way it should be, so it can heal itself. Innate intelligence is a big thing, because in the body, innate intelligence heals the body at its own rate. When misalignments are present, innate intelligence can’t fully do its job.

Q: Which of your personal characteristics make you successful as a practitioner?

A. When I was a student, I was terrified about starting at CUKC. I was several states away from home, it was my first time being alone, and I was a very quiet kid, very shy. Going there the first day I heard, “If you want to be successful, you cannot be shy.” I fell back on being uncomfortable so I could grow. I just had to go and attack stuff and get after it. I joined the campus ambassadors so I could relate better with people and talk to students coming in to CUKC. So really, just diving into the deep water is the thing that helps me be the best that I can be. I jump right in and go after it. I mean, I moved from Vegas to Kansas City, but it turned out to be one of the greatest decisions of my life so far.

Q: How did the clinicians on staff at CUKC help you build confidence as a professional?

A. The clinicians I got to work with really helped me. They told us: “This is how it needs to be done, so you’re either going to get it done or you’re not going to like it, because you have to redo it over, and over, and over again.” The clinicians were a blessing. I had a couple of really hard-nosed, old-school types, and at the time, my friends and I were wondering, “Why are they being this way?” After we graduated, we were glad they were that way because they gave us all they had to make us better. And being able to get on a personal level with them was great, too, because you really got to see what their mindset was, and how they projected their best onto you. It was an eye-opener for me to see that we hadn’t make them mad, and they weren’t taking it out on us; it was all for a reason. They were completely invested in making us the best chiropractors we could be, from adjusting, to talking with patients, to taking notes, to being presentable. They held us accountable.

Q: When you were at CUKC you gave back as a student by being a campus ambassador. How have you continued to be of service to others since you graduated?

A. I’ve talked to kids in high school, or they’re getting into that college phase where I was, a kinesiology major not knowing if they want to be a physical therapist, or not knowing where they can go with their kinesiology degree. I talk to them about my experience, and how I switched gears and went to chiropractic school. I kind of know where they’re at, and I try to keep myself an open book as much as possible, and tell them anything they want to know. I also spoke to the Kinesiology Club at UNLV, they asked if I would come in and tell them about my experience as a new doctor. So just being able to give back and inspire the next group is something that I really take pride in doing.

Q: What were the biggest challenges in your professional career after graduation?

A. The biggest challenge was lining everything up in a systematic way to get stuff done. Whether it was state licensure, dealing with lawyers, finding the right spot (for a practice) or finding out if you need to make letters of intent on a real estate spot that you want — all of that stuff was very challenging. It was a lot of pressure, an immense pressure, but you can grow from it and end up in a spot where you can say, “I can’t believe this actually happened. I can’t believe we actually grew this, and we did fantastic.” And that’s when I fell back on my wife, my family, other doctors, mentors, my classmates and friends to help me stay in that mindset of, it’s going to work, it’s going to happen, and having that belief in your heart that we can get this done.

Q: You’ve talked about mentoring others. What advice would you give someone who wants to follow in your footsteps?

A. I would tell them to get into that very, very uncomfortable zone. I thought I did a decent job of getting out of my shell, but I’d tell others to get out even more. Go out and do things you never thought you would do, whether it’s public speaking, or talking to doctors one-on-one. Picture yourself in a spot that you didn’t think you’d be in, and get into that spot, because being uncomfortable is the only way that you’ll grow. I’d tell them to definitely chase their dream because at the end of this, it’s not me versus another chiropractor, it’s me and the person in the mirror. That’s your only competition. The only person that can limit you is you, and any limitations that you put on yourself. Once you get rid of that, you can go farther than you ever imagined.