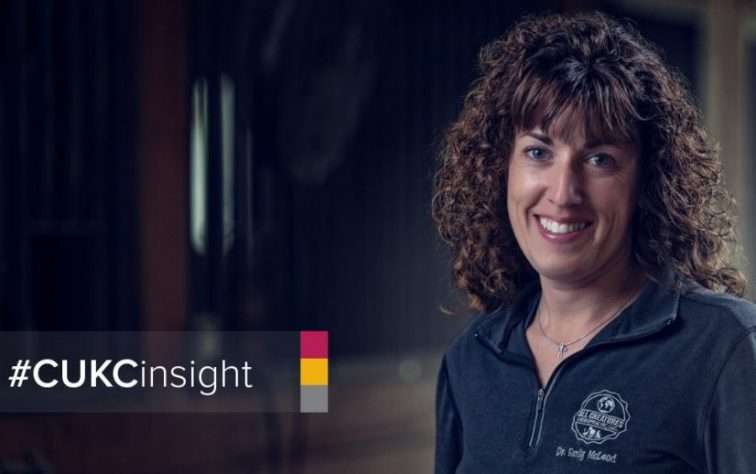 After earning her Doctor of Chiropractic degree from Cleveland University-Kansas City in 2000, Dr. Emily McLeod spent the next four years doing what many others in her profession have done; she built a solid practice by providing people with effective chiropractic care.

After a few years in practice, she received a brochure in the mail about an animal chiropractic program. An animal lover, she began to wonder if chiropractic care could have the same benefits for animals that it has for humans. McLeod then did something that few in her profession have done; she completed the certification program and became an animal chiropractor.

Over time, her work with animals became more widely known, and her patient load increased. In 2013, she made the decision to work with animals exclusively. She is now a doctor for patients that can’t tell her where it hurts. Luckily, they don’t have to.

Q. As an animal chiropractor, you unlock the mysteries of pain and discomfort in those who can’t tell you where they are experiencing discomfort. What kind of challenge does that present, and how do you meet those challenges?

A. In my human practice, I had the privilege of caring for a lot of babies who were also non-verbal communicators. That prepared me to more carefully watch and “read” the body language of the animals I work with today. Because I spend my days caring for non-verbal patients, I have become more observant. One of my biggest and most consistent challenges is teaching the owners, trainers, and guardians of the animals I care for to be equally observant of their animals.

Q. What personal characteristics have been helpful to you in your profession?

A. I’ve always had a way with animals. As a child, I tried to rescue every stray, injured or lost animal. I think an innate ability to work with and understand animals and read their body language is incredibly helpful. Additionally, I’m kind, and I think most of the animals I work with have the sense that and know I’m interested in their well-being.

Q. What keeps you motivated to meet the healthcare challenges experienced by animals?

A. What keeps me motivated is to be a voice for the voiceless and to help animals who are dependent on their owners or caretakers. If I can extend the lifespan of someone’s best friend and improve their quality of life, everyone wins. We have such a finite amount of time with our pets – allowing animals and their people to maximize that time inspires me to keep doing what I do.

Q. What is one of the more memorable days or events in your professional life working with animals, and how did it make an impact on you?

A. There are so many! One of my favorites was years ago when I was asked to examine a horse who’d been lame for nine months. The treating veterinarian attended the appointment and was openly skeptical of chiropractic care for horses. The client who made the appointment had spent over $2,000 on exams and treatments, which hadn’t improved the horse. I was called in, and forty-five minutes and a handful of adjustments later, the horse walked off sound for the first time in nine months. That same previously skeptical veterinarian is now certified in animal chiropractic. Another memorable day was when a previously paralyzed Rottweiler walked into the veterinary clinic for his third chiropractic adjustment. He had been scheduled for spinal surgery, which his owners canceled. I had the privilege of caring for him on a wellness basis for another four years until he passed away.

Q: What is more rewarding for you in chiropractic care: working with animals or humans?

A. I have found my human and animal practices equally rewarding in different ways. One of the most rewarding parts of my animal practice is being able to gift an owner with unexpected additional weeks, months, or years with their best friends.

Q. Has there ever been a time when the results you achieved with an animal surprised you?

A. Even though it happens regularly, I am still pleasantly surprised when I see a paralyzed dog begin walking again. I never had a human patient get out of their wheelchair and start walking again. Animals are amazingly resilient.

Q. What reaction do you get from others when you share your occupation?

A. As a human chiropractor, I used to get the classic “Ohhhh” or “My neck hurts here…” response. When I tell people I’m an animal chiropractor, the typical response is, “That’s a thing?!” Yes, it’s a thing!

Q. How has this unique line of work shaped your career?

A. When I received my animal chiropractic certification in 2004, I was one of seven certified animal chiropractors in Kansas and Missouri. I had no idea I would eventually be a full-time animal chiropractor. Like in my human practice, I still spend the majority of my time adjusting subluxations, but now I come home covered in dust, bodily fluids, and hair. I put on boots and jeans or scrubs and runners instead of business casual clothes, and for the record, I much prefer my current daily uniform.

Q. What advice would you give someone who wants to follow in her career footsteps?

A. I would highly recommend that anyone wanting to become an animal chiropractor start working with animals in some capacity. The more you understand them, the better you can care for them. Volunteer at a shelter. Work in a vet clinic or a kennel. Spend time in barns and with horse and dog trainers. Watch. Learn as much as you can, and then enroll in the best animal chiropractic certification course you can find.