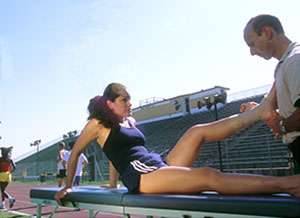 Doctors of Chiropractic: Make Sure You Know What Athletes Know

It’s not a new thing — the benefits of chiropractic are well-known among those competing in the super-specialized world of sports. Today, the idea of maximizing range of motion, reducing injury recovery time, and eliminating pain in natural ways is both logical and possible. Who does that? Doctors of Chiropractic.

What Do Chiropractors Do?

By definition, doctors of chiropractic focus on a drug-free approach to healthcare. Chiropractors are uniquely trained in the diagnosis, treatment, and prevention of disorders of the spine and other parts of the musculoskeletal system.

Athletes See the Benefits of Chiropractic

Athletes from many sports believe in chiropractic. Misalignment in the musculoskeletal system causes unnecessary stress on the body, which inhibits performance and can contribute to an injury. Chiropractic care has been shown in studies to improve speed, flexibility, balance, and range of motion.

The list of world-class athletes who turn to chiropractic care in their preparation is legendary, ranging from Olympic sprinter Usain Bolt to the NFL’s Tom Brady to Major League Baseball pitcher Max Scherzer of the Washington Nationals. In the 2019 World Series, chiropractic treatment helped him recover from a neck injury, which allowed him to pitch in game seven.

We also know this:


If you’re thinking about a career in healthcare, becoming a doctor of chiropractic has an appeal that’s worth investigating.

The Time is Right for Doctors of Chiropractic

Say what you want about the role of sports in today’s culture, but seeing the passion, commitment, and incredible accomplishments of these men and women are inspiring. In fact, you could say the visibility of sports achievements is setting a new level of expectations for the rest of us:

The Doctor of Chiropractic Profession: What Else Should I Know?

The right healthcare career for you is the one that aligns with your core beliefs and achieves the goals you have in life. The question is, “Do you know what you need to know about the chiropractic profession?”

Facts about the Chiropractic profession:

Learning more about chiropractic is just a click away. Check out more key facts here.

What to Know About the CUKC Doctor of Chiropractic Program

Cleveland University-Kansas City (CUKC) is a private, nonprofit, healthcare-focused university with a nearly 100-year history as a chiropractic college. CUKC is in Overland Park, Kansas, a vibrant, highly rated suburb of the Kansas City metro.

In addition to the Doctor of Chiropractic (D.C.) degree, students can choose a concurrent B.S./D.C. option. This degree results in both a Bachelor of Science in Human Biology degree and a D.C. degree, which reduces time in school by as much as a year.

Make sure you know all you need to know about chiropractic. Request the free ebook, Your Complete Guide to the Chiropractic Profession today!