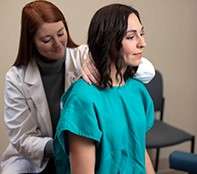 “Do you know the human head weighs eight pounds?” This hilariously random question was posited by the extremely inquisitive and highly adorable six-year-old character, Ray Boyd, played by Jonathan Lipnicki in the 1996 film, Jerry Maguire. The little guy was a bit off, as current estimates have the average human head weighing in at 10 pounds. Still, pretty astute for a kindergartener. He may have grown up to be a chiropractor.

Be a Chiropractor: You’re Needed

So, is there any real significance to the weight of the human head other than it being a fun factoid? There is, as a matter of fact, especially as it relates to the new health epidemic known as “text neck.” Resulting from society’s increasing dependence on electronic devices, text neck is neck pain or damage that is caused by being hunched over with the head tilted down looking at cell phones, tablets or other wireless gadgets.

Employing this poor posture too frequently or too long is why 53 percent of mobile-technology users suffer from numbness or neck pain, according to a 2011 study published in the International Journal of Occupational Safety and Ergonomics.

It’s no wonder text neck is becoming increasingly common, especially when you consider research published by the International Data Corporation (IDC). An IDC study sponsored by Facebook showed that “79% of the population between the ages 18 and 44 have their cell phones with them almost all the time —w ith only 2 hours of their waking day spent without their cell phone on hand.”

The Schooling Needed to be a Chiropractor

Why does being hunched over a mobile device reading texts, sending emails and checking social media result in text neck? It’s all about the weight of the human head and the strain it puts on the spine. As the head bends forward and down, the weight on the cervical spineincreases. Research has found that when the head is tilted just 15 degrees forward, 27 pounds of pressure is put on the spine. A 30-degree tilt increases the pressure to 40 pounds. That pressure over time can lead to chronic upper back pain or muscle spasms, shoulder pain or tightness, headaches, and in some cases spinal deterioration.

Text neck and preventing its development or advancement is the focus of an article on CNET. Three tips are outlined on how to avoid text neck. The first, ironically, is using your device to circumvent text neck by downloading one of the several apps available that detect the angle of your head and alert you to adjust your posture. Next, is working text neck out with exercise and stretching. Finally, the CNET article suggests talking, not typing, by using voice commands and talk-to-text to ease the strain on your neck.

The bottom line, according to “A Modern Spine Ailment: Text Neck” published on Spine-Health.com, is “to avoid looking down with your head bent forward for extended periods throughout the day. Spend a whole day being mindful of your posture.” Whether using a mobile device, driving or watching TV, “any prolonged period when your head is looking down is a time when you are putting excessive strain on your neck.”

Monitoring habits with mobile devices and making changes in the way they are used is a good start and should be employed whenever possible. However, the reality of it is that technology is a large and integral part of our lives. So, despite our best efforts, there will likely come a time when using our devices becomes a pain in the neck.

If that happens, consider seeking chiropractic care. If you want to be a chiropractor, learn all you can about the profession.

Cleveland University-Kansas City (CUKC) is a private, nonprofit, healthcare-focused university specializing in the chiropractic and health sciences. Our chiropractic history started in 1922, and today more than one out of every 10 chiropractors in the United States have earned a Doctor of Chiropractic degree from our College of Chiropractic.

The CUKC campus is in Overland Park, Kansas, a Kansas City area suburb of 190,000 people. Overland Park is recognized for its livability, family friendliness, and affordability.

Learning about becoming a chiropractor starts with good information. You can see why chiropractic care is an excellent fit for today’s healthcare environment by downloading a free eBook right now: Your Complete Guide to the Chiropractic Profession.