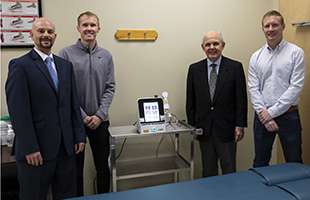 Students in the College of Chiropractic at Cleveland University-Kansas City (CUKC) now have access to some of the most current laser therapy available thanks to the generosity of two CUKC alumni. Drs. Chad and Curt Welter are practitioners who also own Laser Advanced, a laser manufacturing company. They donated the equipment to CUKC, so student interns could use contemporary high-intensity laser therapy (HILT) to treat patients in the Cleveland University-Kansas City Chiropractic Health Center.

Students in the College of Chiropractic at Cleveland University-Kansas City (CUKC) now have access to some of the most current laser therapy available thanks to the generosity of two CUKC alumni. Drs. Chad and Curt Welter are practitioners who also own Laser Advanced, a laser manufacturing company. They donated the equipment to CUKC, so student interns could use contemporary high-intensity laser therapy (HILT) to treat patients in the Cleveland University-Kansas City Chiropractic Health Center.

With this new equipment, student interns will now be able to administer treatment in the Health Center with one of the most high-end, powerful lasers on the market today. And because it was a gift to the institution, the substantial investment that would have been necessary for the University to secure this new technology can now be budgeted elsewhere.

The Welters’ donation to their alma mater was to help broaden the skill set of those students who wish to incorporate HILT into their treatment regimen when they are in practice. Additionally, it was a way to give back to CUKC for preparing them to become doctors of chiropractic.

“The University gave us the tools to be successful, and we wanted to give back by helping students understand a technology that, when teamed up with chiropractic care, can change their lives and the lives of their patients,” Dr. Chad said.

Laser therapy has been found to dramatically speed the healing process in some patients, which can mean a reduction in surgical procedures and, hopefully, less reliance on prescription pain medications. The latter of which is a serious concern, given the current opioid crisis.

In a learning environment such as the Health Center, many will get to experience the impact of what the laser has to offer. From instructional use to patient care, the new equipment should be a valuable tool for clinic interns. Faculty members in the Health Center are pleased to have the new item on site.

Athletic trainers and medical staff use laser therapy in the four major professional sports leagues in the U.S. — NFL, MLB, NBA, NHL — as do the U.S. Olympic teams. Now it is being implemented to accelerate the healing process of everyday injuries suffered by non-athletes.

Following his graduation from CUKC in 2012, Dr. Chad opened Active Family Chiropractic in Overland Park, Kan. His brother, Dr. Curt, joined him in 2015 after he graduated from CUKC. From the start, Dr. Chad knew he had to be an innovator. After becoming aware of the positive results that could occur using HILT, Dr. Chad recognized that it could be beneficial in their practice.

The business grew because of the exceptional care they provided, but also through referrals about their treatment. Dr. Chad says they’ve seen some “really incredible cases,” and they’ve been able to offer relief through chiropractic care and the use of laser therapy. They knew they were on to something powerful with the laser, and they felt it was time to share it with others.

“Dr. Curt and I are so blessed to be able to take what we learned at CUKC, in conjunction with the high-intensity laser therapy, and help so many people in so many different ways,” Dr. Chad said. “So, we decided it needed to be more widely used among doctors.”

The collaboration among all involved in the development process resulted in a product of which they can be proud.

“Our manufacturer has been building high-tech lasers for years,” Dr. Chad said. “They saw our vision of putting out a high-quality product. That’s why we have a three-year warranty on it, and we use our own product in our practice. We’re that confident in it.”

Laser therapy has become known for the rapid healing it can deliver, and the Welters wanted to raise the bar. The fact that Laser Advanced is doctor-owned and they sell one of the strongest lasers on the market is something that works in their favor. They can be advocates for their product because they have the luxury of witnessing its power each day in their office.

“Doctors have been thrilled to widen their scope of patient injuries that they can help heal faster, which creates more word-of-mouth referrals,” Dr. Chad said. “We get patients that have driven five hours, or have flown in to get treated for a few days because we helped someone in their family that lives here. We’ve even had a few from overseas come and stay a week just to get treated with our laser.”

Because of its impact on patient care, they wanted to put their technology in the hands of CUKC students who are the next practitioners. The collaborative treatment of chiropractic and HILT together can reshape what they can do for their patients. It’s changing the landscape of care.

“We wanted students to see first-hand what a quality laser can do and continue to build on the momentum we have in the chiropractic progression,” Dr. Chad said. “It’s an exciting time for our profession.”

Visit Laser Advanced on the web at www.laseradvanced.com for detailed information about their products.