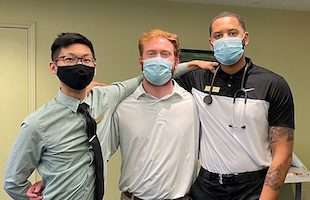 Sports physicals are given to young people to determine whether they should participate in certain sports at school. Proper spine health is key not just to participate, but also to excel in competition. A physical from a professional healthcare provider is a key part of ensuring safe participation in sporting activities.

Dr. Angie Segovia, clinical educator, and community outreach coordinator for the CUKC Chiropractic Health Center, said offering the free physicals was a positive way to connect with others, while promoting good health.

“Part of the University’s service mission is to pursue health care and outreach opportunities in the community,” Segovia said. “An event like this is a great way for our interns to fulfill that mission while they help young people in our area.”

The CUKC interns were referred to the Independence location by Dr. Patrick Hammond. A 1997 graduate of CUKC, Hammond is the owner of Hammond Chiropractic Center in Shawnee, Kan. He also serves as a chiropractic consultant for the Kansas City Royals.

The interns who performed the physicals were Dominic Cain, Kenneth Luong, and Cain Winebrenner. The doctors of chiropractic supervising were Segovia, and Dr. Damon Dennis, clinical educator.