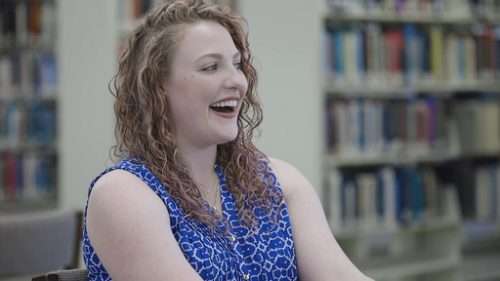 When you’re pursuing a dream, you don’t let obstacles stand in your way. Breanna Bezona, a CUKC doctor of chiropractic student, came to CUKC’s Overland Park, Kansas, campus from Johnson City, Kansas, a town so close to Colorado you could drive there in less than 20 minutes. Although from a rural community with less than 1,500 people and a senior class of 24, Breanna saw herself achieving big things. Breanna Bezona received her Doctor of Chiropractic degree at the spring 2020 commencement.

Of course, deciding to become a doctor of chiropractic was a big step, and it was a childhood injury that gave her a first-hand view of the benefits of chiropractic.

“I had a vague idea of what chiropractic was starting at age four. I fell off a trampoline, and I got hurt,” she said. “I just wasn’t really doing things right,” Bezona said. “I was kind of tripping when I would walk.”

Noticing that Breanna wasn’t recuperating normally, her mom decided to consult with a chiropractor. Both Breanna’s mom and her grandmother understood and appreciated what chiropractors could do. If fact, Breanna’s mom had applied to go to chiropractic school before life circumstances prevented that from happening.

For Breanna, though, chiropractic was a life-changer.

Catch her 3-minute video interview on this page!

“I was adjusted, things got better, and I was just a normal little kid again,” Bezona said.

That normal little kid grew up to be an accomplished student, moving on to graduate with a B.S. in Health and Human Performance from Fort Hays State University, Hays, Kan., in 2016. While she knew she wanted a profession centered around helping people, she found herself not quite sure of the right path to take.

At some point in the decision process, the idea of becoming a chiropractor began to take over her thinking. After all, she had seen a chiropractor regularly all through high school and into college.

That’s when fate seemed to step in.

“I started working for a chiropractor,” Bezona said, “Dr. Brennan Uehling, a 2002 graduate of CUKC’s College of Chiropractic.”

Breanna recalls seeing many people limp in or be hunched over when they came into Dr. Uehling’s practice.

From what she observed in Dr. Uehling’s practice when chiropractic treatments were indicated, good patient outcomes were often the result. She also saw how grateful patients were to have found relief from chronic pain or the aches and discomfort caused by musculoskeletal conditions.

It was a career revelation.

“I realized that, wow, this is an awesome job,” Bezona said, “something that I could do for the rest of my life.”

Dr. Uehling, she said, “would always joke with me that I was going to become a chiropractor. He could just feel it. And I was like, ‘I feel that, too.’ So, it was meant to be that I am here.”

The sensation of destiny fulfilled continued when she came to visit the CUKC campus. She said CUKC felt like the right place for her career as soon as she met with her admissions advisor.

“It was like she knew me as soon as I walked in the door,” Bezona said. CUKC had a “small-town feel” which made a move from a tiny western Kansas town a lot easier to take.

“I was taken on a tour of the school by an actual student, not just somebody who got paid to talk about the school,” she said. “That was when I decided. I was like, ‘Yeah, this is exactly where I need to be.’ ”

Breanna Bezona’s 423-mile move far-western Kansas, to CUKC’s Overland Park, Kansas, campus turned out not to be the only big step in her life. In 2018, she fulfilled another opportunity to help people of all different ages and lifestyles.

That opportunity came by joining other College of Chiropractic students on an annual Epik Missions trip.

Founded in 2004 by Chadwick Hawk, D.C., Epik Missions has a stated goal of “helping to heal the world.” Students must raise funds needed to participate in Epik’s volunteer opportunities.

Last summer, Breanna was one of four CUKC students who were part of the doctor-student teams making the 6,200-mile journey to the city of Ho, Ghana, in western Africa.

When people ask her why she spent the time and money to go on the mission trip, Breanna has a quick answer: As much as you have a chance to change other’s lives, it also changes you.

As she heads toward the last third of her doctor of chiropractic degree, Bezona says she feels fortunate to be part of the College of Chiropractic’s nearly 100-year-old legacy. As a small-town person, she said it’s easy to see personal attention is ingrained into the CUKC educational experience. She says she sees it infused within CUKC’s culture as well, as in the actions of CUKC President Carl S. Cleveland III, the grandson of the College’s founders.

“He spoke to me when I came on the tour,” Bezona remembers. “That was a big deal for me, to not feel like I was a number.”

Catch Bezona’s “One Big Thing” in this 30-second clip

For more personal stories, go to the CUKC YouTube channel