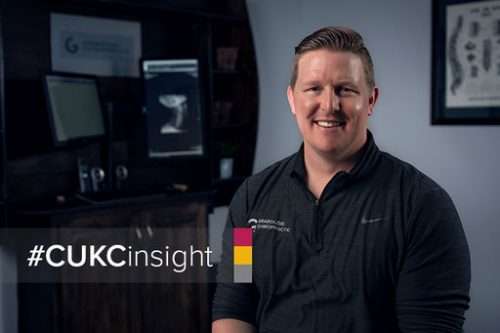 CUKC Insights: A Life By What We Give, Dr. Justin Grabouski, part 2

Sometimes, just when we think we have everything figured out, unexpected circumstances cause a disruption. But for Dr. Justin Grabouski, everything worked out just as it should have. In his case, the disruption was a life-changing baseball injury that led him to choose chiropractic instead of another profession that he had long thought was ideal for him.

Now, 10 years after his graduation from the College of Chiropractic at Cleveland University-Kansas City (CUKC), he is the owner of Grabouski Chiropractic in Overland Park, Kan. He is engaged in a career that he loves, and he gets to help people improve their quality of life every day.

Grabouski’s career choice allows for a schedule that permits him to enjoy ample time with his wife and extended family. He has received professional accolades, including being selected as one of 435 Magazine’s Top Chiropractors, and also being named one of the 10 Best Chiropractors in Kansas by the American Institute of Chiropractors.

His story is a wonderful journey…that almost didn’t happen.

“I was seriously injured while playing baseball. Grabouski said. “I saw the athletic trainers, the physical therapists, the orthopedic specialists…they were all wonderful. They did a great job, but nothing seemed to help at the time.”

Frustrated, and with no relief in sight, Grabouski was approached by an athletic trainer who suggested that he visit a chiropractor.

“I went and saw that doctor (of chiropractic), and he fixed me up pretty quickly – changed my entire life,” Grabouski said. “So, I went in and shadowed him, and spent some time in his office. I saw how amazing his practice was, and saw how happy his patients were, and instantly said, ‘This is what I want to do!'”

Raised in America’s heartland, Grabouski hails from Beatrice, Neb. He earned a scholarship to play baseball at Midland University in Fremont, Neb., and was fortunate enough to play two more years at the semi-pro level. As his playing career was winding down, he was already preparing for life after baseball.

A change of plans

With a fire burning within, Grabouski began to pursue his new calling, but his plans initially received a somewhat lukewarm response from his family. His father was a farmer, and his mother and several other family members were nurses. None had ever visited a chiropractor. However, his grandfather was an avid supporter of chiropractic.

“He loved it!” Grabouski said. “He was the only one in our family who saw a chiropractor and if you ever mentioned it to him he became very defensive because he loved his chiropractor.”

When the time came to choose a chiropractic college, the College of Chiropractic at CUKC was on his radar because it was in close proximity to his Nebraska roots. At the time, he had a brother living in Leavenworth, Kan., which is only a short drive from the Kansas City metro. So, he scheduled a tour of the CUKC campus and was impressed with the experience.

“The staff, the faculty, and all of the admissions people were really wonderful, and they made the process very, very easy,” Grabouski said. “So, I kind of fell in love with that the first time I visited, and I didn’t go anywhere else or look at anything else. I just committed there.”

Now, after a decade in practice, Grabouski remains in awe of what chiropractic can do for others. It started with his own success story, and now, as a practitioner, he can author those stories for others every day, regardless of their circumstances.

“Chiropractic can help anyone,” Grabouski said. “The age range in our office is from three days old to 93 years. Everybody benefits from some sort of chiropractic care, whether it’s quality of life or pain, or dysfunction, or internal conditions.”

Grabouski, reflecting on how he got to this point, acknowledged the coursework at CUKC was challenging, and the study hours intense, yet he knows now that it was worthwhile.

“Because of the way that Cleveland does things, they prepared me very well for everything that I could face in the future,” Grabouski said.

Because of his positive career experience, you would expect Grabouski to be an unabashed supporter of his profession, and he is. He still possesses the same powerful feelings about his career choice, which he shares with others who are considering a career as a doctor of chiropractic. He encourages them to seize the opportunity if it speaks to their soul.

“Most of us (chiropractors) didn’t choose chiropractic, chiropractic chose us,” Grabouski said. “And most students, or future chiropractors, have a unique blend of inner drive with a selfless nature. So, listen to that, move forward, and chiropractic will quickly become your purpose and your passion.”

Looking back to pay it forward

Grabouski can still recall what it was like for him as a student, and the things that made an impact on him. Now as an alum, he uses his practice as a learning tool for CUKC students. They get to meet patients, interact with the staff and learn more about what a doctor of chiropractor experiences daily.

“A lot of students ask about how you build a practice, and our answer is pretty much always the same. We build through referrals,” Grabouski said. “So, I always try to put the emphasis on taking care of those people that are in front of you. Help them with whatever condition that they have. Treat them very, very well, and they’ll be compelled to send friends and family to see you.”

As a CUKC alum, Grabouski tries to give back to the University all that his education has given to him. Preparing CUKC students for the career that lies ahead is one way to do that. That’s why he tries to be an available resource for those who will follow him into the profession.

“I think the longer I’m in practice, the more I reflect on how much the University did for me, and the more I’m compelled to give back and help the students who are there, to show them what the future can bring if they stick with chiropractic.”

Better to Give Than Receive

Although the Greek translation for chiropractic is “done by hand,” it’s a profession that also involves the heart. While speaking to a group of prospective students at a CUKC open house, Grabouski reminded them of the compassionate side by sharing the words of WWII British Prime Minister, Winston Churchill, who said: “We make a living by what we get, but we make a life by what we give.” The statement has become a mantra for Grabouski, because what he gives each day keeps both his life and his heart full.

“I’m happiest when I’m in my practice helping people,” Grabouski said. “Knowing those people are coming to us for a certain condition or a certain issue, and we have the opportunity to make their day better than it was when they walked in. There’s no better feeling at the end of the day than knowing you did that.”

Grabouski began his career as an independent contractor, where he helped to build a practice. He left that group of practitioners to open his own office. He has learned much along the way.

In the final assessment, hard work and desire have served him well to this point, but there were others who played an integral part in what he’s achieved. He is grateful for their support and looks forward to what the future holds.

“So far, I’m most proud of the journey that I’ve been on,” Grabouski said. “But I didn’t do it alone. I have a wonderful wife that helped me along the way. I’ve had a lot of chiropractic mentors that helped me, and I feel like we’re just getting started.

Catch Dr. Grabouski’s “One Big Thing” in this 30-second clip