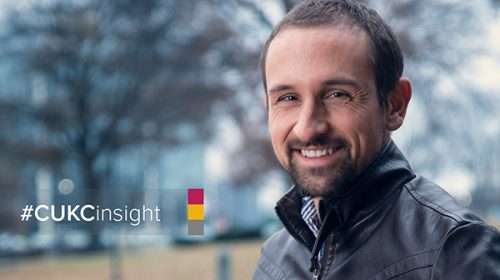 It seems evident that someone who’s gone through a long period of health problems would have the empathy needed to become a doctor. That’s precisely the case history for Dr. Sammy Somerhalder, a Fall 2018 graduate of the Cleveland University-Kansas City College of Chiropractic. Just before graduating from CUKC, Sammy took some time to reflect on his experience with pain and illness…and how he was inspired to become a doctor of chiropractic.

Q. How did you get connected with chiropractic?

A. About seven years ago, I went through some serious health problems. It all started with ibuprofen, innocently enough, just for simple wrist pain. People do it all the time. I didn’t think anything of it.

The next morning, I felt fine. I started eating breakfast, and about 20 minutes later, I felt this horrible pain, the worst pain I’d ever felt in my life, right in my stomach. I was on the ground, curled up in a fetal position. It was awful. And from there, I went to the doctor. They said I had an ulcer and put me on acid reducers and proton pump inhibitors. They put me on those to lower my stomach acid to try to heal the ulcer.

I did that for a month or two, just trying to get the ulcer healed. Without enough stomach acid, you don’t break down food properly. Eventually, I developed food allergies. I actually got to the point where I couldn’t eat anything because everything I ate caused horrible acid reflux. I would wake up in the middle of the night because of the acid reflux, crying with depression. It was the worst time of my life.

I remember my first thought was, “There has to be something else I can try.” And after a few months, my mom suggested a natural doctor, a chiropractor, that her friend knew.

A. I went in, and within the first five minutes, he said I had probably developed an allergy to gluten or dairy. And my mind was blown. I was like, I’d heard of those things but, you know, doctors had never mentioned it. I cut those out of my diet, and he put me on some natural substances, like liquid chlorophyll, to help heal the gut. Taking stomach acid away not only didn’t fix the problem, it actually had been making it worse.

Before too long, I was the healthiest I’ve been in my life. I wanted to go to school and pass this on to other people.

Q. What attracted you to Cleveland University-Kansas City?

After what I’d been through, chiropractic looked like a really good option. It looked like something I could do for the rest of my life, and I had the ability to help people. So, I started looking at schools.

I had, of course, heard of CUKC because a good friend of mine had come to school here. I checked it out. One of the things I liked about the school was it had a very small-town feel to it. I grew up in a small town and went to a small college. I really like how CUKC feels. You get to know everybody.

Q. What is your favorite memory from CUKC?

A. My favorite memory since I’ve been here would have to be being the two-time Mr. Clevelander pageant champion. The Student American Chiropractic Association on campus goes to Washington, D.C., every year to help with chiropractic lobbying. They do a fundraiser called the Mr. Clevelander event.

Q. What are you looking forward to when you’re in private practice?

A. Working under a doctor who does a lot of functional medicine. Functional medicine uses nutrition to address the underlying causes of symptoms. I’m very passionate about that because America has a nutrition problem. I like saying people can turn their lives around using different avenues, and the healthier they are, the more effective they are in their work or their marriage. I’m excited to get out there and pass that knowledge along.

A. Now, chiropractors only see about 10% of the population. But I think people are starting to come around. I think the opioid problem has been a big, big part of that. People see that there are other solutions.

Q. What advice would you give to the next generation of chiropractic students?

A. What I would say to students considering chiropractic is they should be very passionate about it, because our profession is all about taking care of the patients.

Go to the CUKC YouTube channel for more Insight stories