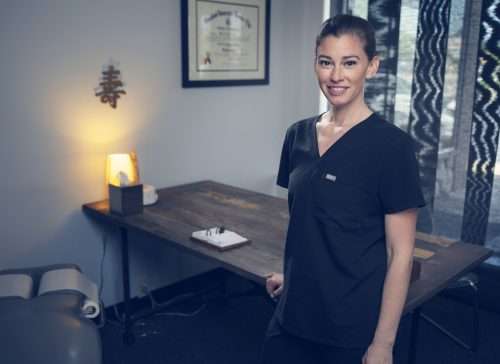 It’s a tale that’s all too familiar: the child whose future seemed fully mapped out decides to go another direction; then, through unique and compelling circumstances, finds herself drawn back to a life that not only feels right, but is perfectly aligned with her talents and interests.

For Dr. Sherri Hays (’11), it seems the further she tried to distance herself from her most likely future, the stronger the love of family, the chiropractic profession, and her native Oklahoma became.

“My father is a chiropractor, so I grew up with chiropractic,” Dr. Sherri Hays said, reflecting the single-focus thinking kids often had when they are young. “If I had a headache or wasn’t feeling well, I said, ‘Dad, can I get an adjustment?’ I didn’t realize that wasn’t really the norm.”

“All the girls were like ‘What’s an adjustment?’” Hays remembers, recalling the perplexed looks from her friends. “It was then I realized I knew something a little special.”

That little story might make you think Hays always knew she was going to be a chiropractor like her father, Dr. Steve Hays, a 1977 College of Chiropractic graduate.

And while Hays said she is envious of people who have those kind of fulfilled destiny stories, she remembers being determined to “pave my own way.” An accomplished student throughout her early days in Tulsa schools, Sherri Hays envisioned a future that had little to do with learning the intricacies of Force Sensing Table Technology or mastering the five diagnostic criteria of the Gonstead system.

“I wanted to go into child psychology or international business and travel the world,” Hays said.

True to her determination not to go into chiropractic, she earned an undergraduate degree at Oklahoma State University, then headed south. In Dallas, Hays became a leasing manager for Lincoln Property Company, the second-largest apartment managing company in the U.S.

“I loved it, and was promoted pretty quickly,” Hays said. Although she won the company’s Rookie of the Year Award, she began to see that in the corporate world there would be a ceiling.

“So, I saw the max of what I could be doing in that career,” she said. “That’s when I decided I wanted to be in a profession that was really limitless.”

That realization brought back thoughts of the benefits she had seen first-hand growing up from her dad’s profession: operating a chiropractic practice.

So, abandoning the corporate path, Hays headed back to college, this time to the College of Chiropractic at Cleveland University-Kansas City (CUKC).

Why CUKC? Hays is quick to note her choice for becoming a chiropractor went far beyond knowing this was where her father went to college.

“The moment I toured the campus,” Hays said, “I knew it was the right place for me.”

She noted several CUKC advantages, any number of which might seem obvious to other CUKC College of Chiropractic alumni. She acknowledges the significance of the pioneering chiropractic history behind the Cleveland name, the feeling of being a community, and the tradition of high National Board of Chiropractic Examiners (NBCE) board scores. She gives special accolades to the faculty for their dedication and expertise – and having a purpose behind every piece of knowledge included in the chiropractic curriculum.

“They probably don’t even know how much of an effect that they had on my career,” Hays said. “There are so many times where I think back to a classroom, and I thought, ‘I’m never going to need this…when are we going to see patients?’ And then I would realize later that I did need it!”

That feeling of getting a comprehensive chiropractic education continued throughout her years at CUKC. Whenever a board exam was coming up, Hays said she always felt ready.

“I knew exactly what to do because the faculty prepared me. I really wasn’t nervous,” she said. “The College had given me everything I needed to succeed.

With her Doctor of Chiropractic degree accomplished in 2011, Hays began planning for her new profession. One important step: talk to dad and get his thoughts.

“I asked him, ‘Where should I open my practice?’ and he said, ‘I can’t tell you where to go. You need to go where you want to live.”

“So naturally, being the spirited individual I am, I said, ‘Let’s do New York City.’”

Later that year, Dr. Sherri Hays is in private practice next to the historic Flatiron Building, 23rd and Broadway, in the middle of Manhattan.

Pausing for a minute to think back to the New York practice, Hays reflected on the universal appeal of chiropractic to people and opportunities chiropractic provides.

“Chiropractic works everywhere. You can go anywhere you want to go. You can work for someone if you want to, or you can start your own practice and have your own business,” Hays said. “I’m a good example of that.”

The fairy-tale-type story of how a second-generation chiropractor from Tulsa, Okla., beat the odds to manage a successful chiropractic practice in the largest city on the eastern seaboard was altered by a single phone call.

Her father, still operating his solo practice in Tulsa, had a medical condition that would require him to step away from the work he loved. Hays decided to come back to Tulsa until her father was able to resume running his practice.

Stepping into an establ ished practice proved a tremendous opportunity.

“He offered me the experience of running his practice until he could return,” Hays said. “I happily agreed! What an honor it was to learn how to run such a busy practice.”

Meanwhile, Hays was still trying to her practice in New York. Turns out, running two practices 1,800 miles from each other is rather difficult. Eventually, Hays said she saw a solution that made the most sense for her and her dad.

“I realized it was going to be a lot better for me to have my practice in Tulsa, and to sell the practice in New York,” Hays said. “So that’s what I did.”

Hays Chiropractic + Acupuncture was launched in Tulsa in 2012. Sherri began building her patient base while seeing her father’s patients in the afternoons.

In 2017, Hays and her husband, Sebastian, learned she was pregnant with twins. At 12 weeks, however, she was put on bed rest. In a classic example returning a favor, her father, now healthy, was ready to fill in for his daughter’s patients.

“He saw my patients two afternoons every week and maintained my practice,” Hays said.

After the twins were born, Hays eventually returned to her practice.

“It’s been growing ever since,” she said. “Last November we moved to another space.”Hays’ Tulsa office and practice philosophy reflect the value she places on efficiency and work-life balance. Her office is not large – about 1,000 sq. ft. – just roomy enough for her and her two staff members. She believes in keeping overhead low and attention to patient care high.

Hays emphasizes that in addition to making sure she has the necessary diagnostic equipment; she puts a focus on “letting the patient know we’re there to listen to what they have to say.”

It’s because of her patient-care instincts and CUKC-taught diagnostic and treatment skills that she’s been able to help so many people.

“I had a patient come in my second month with low back pain. We X-rayed and saw that he had a very large abdominal aortic aneurysm,” Hays remembers. “I said, ‘You need to go right now to the emergency room.”

The patient went immediately to a hospital and had life-saving surgery.

Hays had another patient whose legs were amputated due to injuries in a car accident. He was in constant pain, but was told by his doctors there was nothing left to do. His activity was severely limited. Yet, through chiropractic treatments supplemented with acupuncture, her patient was eventually able to move more comfortably and have less pain.

“When you start school,” she said, “you think, ‘I’m going to adjust patients,’ but you end up doing a lot more than you would expect.”

In yet another plot twist, Hays’ husband, Sebastian, began his own chiropractic journey in 2018. He had been motivated by Sherri’s chiropractic experience and decided to start his own second career. Now a Tri IV in at the College of Chiropractic, he looks forward to his own chiropractic future. Meanwhile, he stays in the Kansas City area during the week and heads back to Tulsa for the weekend

Obviously, the Hays family must work diligently to carve out family time with their two-year-old twin boys, Hays and Oliver. With the chiropractic profession, Hays said, “you are able to run a successful practice, and also have a great family life.”

You see the dedication to family life by Hays in her personal and professional story, and it seems obvious that she is fulfilling her destiny. Hays speaks with conviction when she’s asked about offering vital advice for today’s CUKC students.

“The meaning of life is to find your gift,” she said, “and the purpose of life is to give it away. Chiropractic is a profession where you really can find that meaning, and you can give it away every day that you’re practicing.”

What is the “One Big Thing” from Dr. Hays? Watch this 30-second clip

Ready for more? Go to the CUKC YouTube channel for more Insight stories