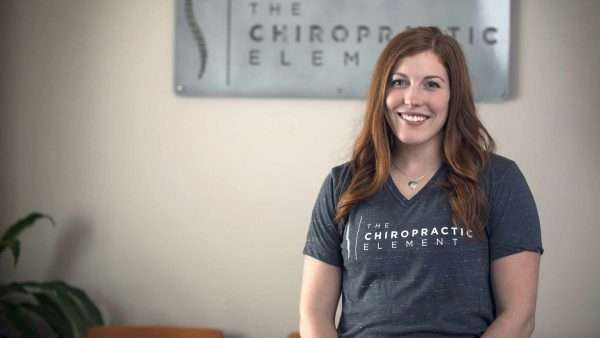 #CUKCinsight with Dr. Hanson, In Her Element, part 2

After graduating from the College of Chiropractic at Cleveland University-Kansas City (CUKC), the options for new practitioners are limitless. One can choose to practice in the mountains, by the ocean, in a rural locale, or a bustling metropolis. Some choose to move someplace new with no familial connections or friendships, and others seek the comfort that comes with a return to a place they know well.

The latter was the case for Dr. Abby Hanson. After graduating from CUKC in April 2018, she opened her practice, The Chiropractic Element, in her hometown, Lawrence, Kan. Although she was in familiar surroundings, Hanson still had to face the decidedly unfamiliar territory associated with starting a business. She had family close by for support, and she also possessed a relentless drive to succeed. Both were essential in helping her start her career.

After graduating from Washburn University in 2013, Hanson, armed with a degree in biology and a minor in chemistry, was preparing to apply to physician assistant school. Part of that process was accumulating patient contact hours working in a hospital. After a few months of completing those requirements, Hanson was working in the postsurgical unit when she had a career awakening. She realized she wasn’t happy in the medical field.

As she re-examined her thoughts about her future, she knew she had to explore other options. She answered an employment ad and applied for a job working in a doctor’s office. As it happened, the doctor was a chiropractor.

“They explained chiropractic to me and light bulbs and fireworks went off and I was like, ‘Why doesn’t everyone see a chiropractor all the time?’ Eight months later, I was in chiropractic school,” Hanson said.

She began her chiropractic journey at CUKC, choosing it for practical reasons: “It was close to home,” she said. Never one to shy away from a challenge, Hanson watched, studied, lived and learned chiropractic. While immersed in the rigorous academic program, she was constantly preparing for the many lectures, quizzes, and tests that comprise the Doctor of Chiropractic degree program.

But in the stages of her academic pursuits, she learned that her biggest test was yet to come — single parent.

“I started at CUKC in January of 2015, and in March, I found out that I was pregnant with my little guy, Sebastian,” Hanson said. “At the end of trimester three, I gave birth. He wasn’t due until after finals but, you know, life never goes according to plan. He was born the week before finals, and I went back to school two days later and took some of my exams.”

The University allowed Hanson to divide her finals, taking some right after her son’s arrival, and the others in January when she returned from the holiday break. Her fellow students rallied around her, both during her pregnancy and when she returned with the baby. As a result, young Sebastian quickly became a favorite among her classmates.

Although Hanson faced different challenges after the arrival of her son, his birth only sharpened her focus when she returned to the classroom. After graduating from CUKC in 2018, Hanson considered doing an associateship, but instead, she decided to start her own practice. And when it was time to choose a location, there was never a doubt where she wanted to be. Her heart was in Lawrence, and her practice should be, too.

To prepare, she researched various types of practice management operations and explored different office environments. Those experiences were beneficial to her when establishing how she would run her practice. Hanson opened her business, The Chiropractic Element, in June 2018.

“It was interesting to see how other offices ran compared to the office that I worked in before I went to chiropractic school. There are tons of different ways you can run an office; you just have to find what works for you and the kind of practice that you want to run.”

Although she was trained as a chiropractor when she left CUKC, Hanson had to quickly become fluent in the language of business. As a result, she experienced a few bumps in the road along the way as she received a new and very different kind of education.

“In my first year of practice, I’ve learned how many hats small business owners wear, from accountant to lawyer, to vacuum maintenance, table maintenance, cleaning lady, banker…everything. You do everything as a business owner. And I guess I didn’t think about all that before I started.”

All businesses experience a few missteps along the way, and Hanson’s practice is no different. Not long after opening, technology issues caused her some frustration. She knows now that she wasn’t quite as prepared as she could’ve been in some areas, and if given the chance, she would’ve done some things differently.

“Before starting my practice, I would have researched Electronic Health Record (EHR) programs a little more because I made kind of a poor decision in my EHR program initially,” Hanson said. “And four months in (to practice) I had to go in and change my EHR program, which was just a huge, huge headache.”

Hanson has additional advice for future practitioners regarding cashflow. To avoid operational headaches, plan to have a reserve fund in place to cover expenses because in some cases, there can be a substantial gap between services rendered and when payment is received.

“You have to plan ahead for expenses that are unexpected, and you can’t guarantee that you’re going to get paid for a service that you performed even three months ago, because sometimes there are hiccups in the process,” Hanson said.

Hanson also stressed the need for attention to detail when submitting insurance paperwork, to make sure it is completed accurately. Even the smallest of errors can cause administrative headaches.

Another tip to smooth the transition into business ownership is to reduce expenses by purchasing used office equipment. By securing a loan, Hanson was able to purchase a digital component for her used X-ray machine and a new table, but everything else she started with was used. Prudent spending can keep a new practitioner from accruing additional, unnecessary debt.

In her search for continued personal and professional growth, Hanson has not limited her wisdom pool. She has relied on the knowledge of her peers in chiropractic, but she has also sought the guidance of other professionals to help prepare her for success in business.

“I prepared by shadowing other doctors and talking to mentors. Some weren’t even chiropractors,” Hanson said. “I have a mentor who is an orthodontist, and he’s helped me with a couple of business decisions and led me down the right path for different business choices.”

And while there were setbacks during her first year, there were just as many successes that make Hanson beam with pride. Her learning curve is ongoing, but she continues to be fueled by the positive energy derived from doing good for others.

“I am most proud of the community that I have built here with The Chiropractic Element,” Hanson said. “We do a lot of giving back to the area, and that’s what I’m most proud of. After a year in practice, I have given over $6,000 back to the Lawrence community.”

Understanding how to balance the treatment side with the business side of a practice is sometimes difficult, but not impossible. Each person is different, and as a result, each person has their own way of handling things. Hanson’s learning curve continues even after more than a year in business. Around her practice, she and her staff have adopted a mindset that if you don’t succeed the first time, simply try it again a different way.

Hanson knew that becoming a business owner would be challenging, but it’s not something that should discourage a current chiropractic student from pursuing the same path. A business may test your patience, she said, and it can be nerve-wracking at times. In the end, it’s very rewarding to build something that is yours. Hanson knew she had to believe in herself and be willing to work hard to make it happen.

“Opening my own business is one of the scariest things I’ve done because it’s my livelihood,” Hanson said. “And if I don’t succeed, then that means I go under. But for me, that pushes me to do better. So, I would encourage someone to go after their dreams and make them a reality. And if you want it bad enough, you’ll get it.”

Hanson has no plans to go under. She is already thinking about the future. She has a five-year plan in place that will see her current location become a satellite office. That will complement a second, larger location, in a building that she plans to own. She anticipates adding one or two associates and has a goal to become more business savvy businesswoman with each passing year.

“I don’t want to ever feel like, ‘Okay, I’ve reached the top, I’ve done it, I have nowhere else to go,’ because that’s not true,” Hanson said. “That’s not me. I feel like I can always grow as a person and help my community grow.”