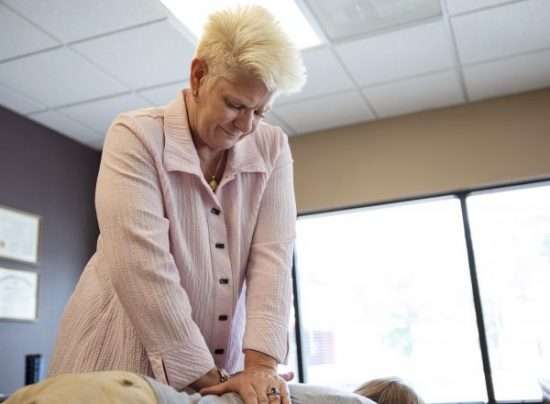 When you meet people who are so gifted at what they do, you sometimes imagine professional success came quickly and easily. That, however, is not how it worked for Dr. Lynn McIntosh. Spend just a few moments in her West Plaza office in Kansas City, Mo., and it’s clear patients love being treated by her and her staff. You’d also be quite surprised to find out she was once someone who attended seven undergraduate colleges. “Early on, I did not have the patience to be successful in a college setting. Later in life I had developed the focus and discipline to pursue my life-long dream,” McIntosh said.

So how does someone get from that mindset to a decade-and-a-half of operating a twice-expanded chiropractic office? It certainly seems to have something to do with hard work and the persistence to fulfill a vision that perhaps only you can see.

“I wanted to be a chiropractor at age five,” McIntosh said, “but I did hate school.”

To understand the irregular path leading from that sentiment by a young Lynn McIntosh to the confidence and competence that exudes from Lynn McIntosh, D.C., takes a bit of an explanation. You have to leave the business of a Kansas City-based professional life and head northwest to small-town Atkinson, Neb., just 40 miles short of South Dakota.

“My mom was a rancher, and my dad was a jeweler,” McIntosh said, “and so that was kind of different. Not only did I go work on the ranch, but then I’d get to go to jewelry shows.”

The rural life translates into hard work, extending from before the sun’s up to after sundown. Aches and pains – and sometimes injuries – are part of the farm and ranching lifestyles. That being the case, you generally find small towns and rural areas had something that many city folks missed: a community culture that accepted chiropractic as a healthcare necessity.

The rural life is inherently physical, so McIntosh said there was certainly “no stigma for going to the chiropractor.” You needed to be able to work, so when it came to pain, soreness, or stiffness in the neuromuscular system, a trip to town often included a visit to the chiropractor.

“I saw chiropractic work in the lives of my family for years,” McIntosh said. “It was amazing to me to see the immediate results that the chiropractor got. I thought it was just amazing that you could actually make a difference immediately. I’d certainly not seen them get better like that with any other healthcare professional.”

That early introduction to chiropractic care did make an impression on young Lynn. Meanwhile, a lack of focus in a classroom setting led her to some dynamic life experiences.

“I did every job you can imagine. I sold life insurance. I had a vending company for 10 years,” McIntosh said. “They were all fun, and they were all interesting.”

Those jobs, she said, were not satisfying.

The change agent for McIntosh turned out to be one of life’s big twists and turns. At age 35, she found herself back at home, taking care of her dad when he was dying of cancer.

“I had sold my vending company, and I was either going to just get old…or get old and finally become a doctor. So, I went back to college at age 35.”

Going into chiropractic at that point – later in life – happened when McIntosh was finally ready for a laser focus on school.

“I had gone to several different colleges and had lots and lots of hours, but none of them really applied to the same major or career,” she said. “I would ace every class that I liked, and not do the work in the others. So, for me, the best part of the College of Chiropractic was that they had the pre-chiropractic program, the human biology program, and the doctoral program all packaged together.”

“It was a good path for me,” she said. “I took a lot of the preprofessional classes because I didn’t have all the science classes that I needed. And then I also got the bachelor’s at the same time as the doctor of chiropractic.”

True to her entrepreneurial personality, McIntosh started her chiropractic practice, choosing to locate in Kansas City, Mo. – a city she knew a little bit about from travels with her sister.

She launched Kansas City Chiropractic, P.C. in May 2003, and like many chiropractors, she started small but had big plans.

“It was a very small clinic, 1,000 square feet,” McIntosh said. “Five years in, we moved to a bigger space and doubled the size of the clinic. And then five years later we doubled it again.”

With each step forward, the practice added more services and now includes not only chiropractic, but also decompression, acupuncture, massage therapy, and limited physical therapy.

“Because of that, we are able to see a variety of patients and treat a variety of conditions,” McIntosh said.

From the very beginning of her professional life to today, McIntosh continues to be amazed at how the human body can compensate for damage and injury. Kansas City Chiropractic, she said, is committed to finding ways to support the body’s natural efforts to self-heal.

“In our office, we do an awful lot of extremity adjusting,” she said, “and because we do sports, we do everything: the ankle, knee, hip, shoulder, elbow, wrist. You think of shoulders and baseball players, and you think ankle and knee problems for soccer.”

In addition to her chiropractic degree, McIntosh is board-certified in acupuncture. She holds an Advanced Certification in Whiplash and Brain Injury Traumatology from the Spine Institute of San Diego. For years, McIntosh was a Certified Chiropractic Sports Physician (CCSP).

“I’ve been able to work with a lot of athletes, and I wish I could tell you some of our pro athletes that come in. The HIPAA law does not allow me to do that,” McIntosh said. “What’s interesting to me is many professional athletes maybe didn’t start as young as a lot of my kid athletes. I might have a nine-year-old that has a knee injury because they’ve been on a traveling team for three years.”

When it comes down to it, McIntosh and her staff want to help people reach their goals. It doesn’t matter if it’s an unnamed pro athlete or a 70-year-old patient who wants to feel better.

“She wanted to be able to walk from her car without stopping (to rest),” McIntosh said about one senior adult who faced chronic pain. Following chiropractic assessment and care, the patient can now go to her college team’s basketball games and walk comfortably all the way inside from the parking lot.

“That was her goal, and we got her to that goal,” McIntosh said. “Whatever helps our patients reach their goal makes us feel good. Everyone in the office is a part of every person’s improvement.”

McIntosh’s success is paired with a sense of obligation to the new classes of chiropractic students. Her advice to younger students is to shadow a practicing chiropractor.

Shadowing, and later, doing internships or preceptorships are important, she said, because this allows you to experience different practices. It’s never too early to collect ideas about what might and might not work best for the type of practice you want.

“Your practice has to fit your patient-care style, and it has to fit your personality,” she said. The practice model must then be matched to a solid business plan to ensure success in a very competitive marketplace.”

Once you have your identity, McIntosh says it’s essential to provide the best possible patient experience.

“I could be the best doctor ever,” she said, “but if you have a negative experience, you probably aren’t coming back.”

Although McIntosh came to chiropractic later than most, she has no regrets about how it happened. What’s important is that it did happen.

“Chiropractic is just a lot of fun because you get to interact with different patients and different people all the time,” she said. “My patients are from every socioeconomic background and all ages. The cool thing for me is to see someone who is maybe not the nicest person because they’re in an excruciating amount of pain. As they get better each time, you get to see the really interesting person they are.”

The way McIntosh sees it, chiropractic provides a spectrum of high-level of patient care without being invasive and without medication. Most often, what you do see is a positive change in the people who come to you for treatment.

“So, there’s really no downside,” McIntosh said. “When you can see somebody get better just by what you do, it is truly satisfying.”

What is the “One Big Thing” from McIntosh? Watch this 30-second clip

Ready for more? Go to the CUKC YouTube channel for more Insight stories