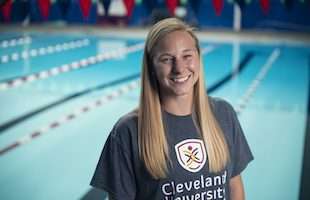 Cleveland University-Kansas City (CUKC) will be cheering for one of its own this summer who will be on the national stage. Madison Strathman, a first-year student in the College of Chiropractic at CUKC, will be participating in the Olympic trials on June 5, 2021, in Omaha, Neb. She will be competing against the nation’s best in the 100-meter breaststroke, for the chance to advance to the Summer Olympics in Tokyo.

Preparing for the trials hasn’t been easy for the full-time student. Strathman has been doing “double duty” to maintain her training schedule and continuing to meet the rigorous demands of the Doctor of Chiropractic degree program.

“It’s definitely been a challenge trying to balance both of them, I’ve had to miss practice for Zoom sessions, for class, or other school events,” Strathman said. “When I have 3-4 tests in a week, those extra 18 hours each week that I’m spending in the pool would certainly make the studying aspect a little easier, but swimming taught me time management from the beginning, so now I am relying on those skills to continue to get me through this busy time and succeed in both.”

This will be her second trip to the trials. In 2015, Strathman earned a scholarship to swim collegiately for the University of Arkansas. That year, she qualified for the 2016 Olympic trials in both the 100- and 200-meter breaststroke.

“By the time I was a freshman in high school, the goal was definitely to get a scholarship to swim in college,” Strathman said. “I had dreams of making it to the Olympic trials, but I never thought that was a real possibility.”

Strathman was looking forward to a second run at the Olympic trials for the 2020 games but it almost didn’t happen. A serious shoulder injury in the fall of 2018 disrupted her plans. In spite of her injury, she was able to qualify for the trials that winter, but only in the 100-meter breaststroke. Her shoulder was too weak to attempt the 200-meter competition.

After a lengthy shoulder rehabilitation regimen didn’t help, surgery was her only option. She was out of the water for nearly two years, which threatened to eliminate her from the Olympic trials. In 2020, Strathman moved back to Kansas City and started classes at CUKC in the fall.

“The expectations are not to go a lifetime best time or anything like that,” Strathman said. “The expectation is only to have a great time, enjoy this incredible experience that so few people get the opportunity to do, and to officially put an end to my career at such a high-caliber meet…hopefully on a high note.”

The 2020 Summer Olympics are scheduled for July 23 through Aug. 8, 2021. The U.S. Olympic Swim Trials have been split into two events due to concerns about COVID-19 and overcrowding. Strathman will compete in Wave I, which takes place June 4-7.

Madison Strathman had a solid performance at the Olympic Trials on June 5. She took part in Wave I with 57 swimmers. There were seven heats for the 100-meter breaststroke, and she placed first in heat three with a time of 1:11.14. Although she didn’t beat her personal best time for the event, she did place 14th overall out of 57 competitors. Only the top two swimmers advanced. After being out of the water for nearly two years, it was a crowning achievement to compete against the best in her sport one more time.