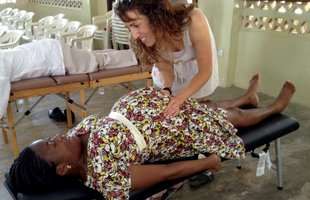 Passion is at the core of what chiropractors do every day. It’s also the fuel that drives many in the profession to step outside their comfort zones for causes greater than their own. Dr. Emily McLeod Long ’00 took such a step for the first time during the summer of 2013, when she volunteered to join a mission trip to Africa organized by fellow Clevelander Dr. Chad Hawk ’99. The 14 days McLeod Long spent in Ghana with Epik Missions were life-altering, and have prompted three return trips to Africa in the last six months.

McLeod Long had a strong desire to serve in Africa for years, having heard about chiropractors traveling there to care for people in some of the continent’s most impoverished countries. These are destitute areas where healthcare is dismal and chiropractic is unknown. To that end, McLeod Long and her compatriots put a strong emphasis on educating the patients they served on these mission trips to Ghana, Malawi and Uganda.
“Chiropractic is simply not well known in Africa and, in fact, was entirely new to most of the people I served,” McLeod Long said. “As a group, we were careful to give health talks prior to adjusting people. Education is so critical. Working as a solo practitioner in Malawi, I made sure I educated every patient I cared for, as best as I could without an interpreter. Chiropractic has been nothing but well received in all three countries in which I’ve served! It’s been a joy to share chiropractic with parts of the world that would never otherwise have experienced it.”
While on these mission trips, McLeod Long cared for infants, school children, villagers, teachers, pastors and a variety of others. The one thing they all had in common was their heartfelt appreciation.
“The smiles and gratitude of every person I cared for was overwhelmingly fulfilling,” McLeod Long said. “To lay hands on the ‘untouchable’ and to care for them physically, as well as emotionally and spiritually, was an incredible privilege. To care for those who would normally never benefit from chiropractic was fabulous! One of the most incredible chiropractic experiences occurred on my first trip to Ghana. I had the opportunity to care for a man named Samuel, who had had a stroke nine months earlier. As a result of the stroke, he lost the use of his right arm and hand, and he lost the ability to speak more than 3 words at a time. He lost his job, because as a right-handed teacher, he could no longer write on the board or speak to instruct the kids in his classroom. After one adjustment, he gained mobility in his right arm!”
McLeod Long said her trips to Africa were filled with so many stories like Samuel’s, heartwarming encounters of how her chiropractic treatments changed lives. All the while, these experiences were changing her as well.
“All of these trips have changed me,” McLeod Long said. “The people of Africa are kind and gracious and happy. They have nothing, yet they want for nothing. They are grateful for anything given to them. They have not been polluted by the spirit of entitlement that is so pervasive here in North America. As a result of serving in Africa, I have become profoundly aware of, and even more grateful for, the many blessings in my own life. I have also become more patient, as things there run on what I call “Africa time.” Impatience is refreshingly uncommon in Africa. I also became more kind and genuinely interested in knowing how people around me are doing. As a people, Africans care less about what you do for a living and more about who you are related to and how you are doing.”
She said she will never forget the graciousness and positivity of her African patients, despite the “beyond impoverished” conditions many of them endure. One more thing left its mark on Long, although in a different way. It was a question many of the patients asked Long and other members of her team.
“They asked us very candidly and with sincere emotion: ‘What shall we do when you leave?'” McLeod Long said. “It was heartbreaking.”
Back in the states, McLeod Long is settling into a new practice model. In 2013, she made the transition to a full-time animal chiropractic practice. This came after having treated animals on the side for about nine years, which resulted in her working 70 to 90 hours per week. The switch means far less hours and affords her the flexibility to serve overseas on missions.

McLeod Long is currently working to organize a chiropractic trip to Malawi in 2015, and is seeking other D.C.’s to join her. She can be reached at (816) 694-9003. Visit http://tinyurl.com/EpikMission to view a video on McLeod Long’s Ghana trip with Epik Missions.

Shape the Future of Health Care