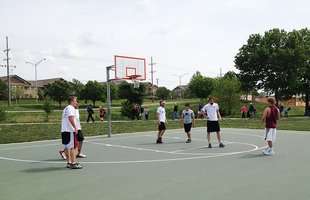 Clevelanders ‘laced ’em up to throw it down’ during a recent 3-on-3 Basketball Tournament fundraiser. Held May 17 at Switzer Park in Overland Park, the tournament was sponsored by Sports Council and the Student American Black Chiropractic Association (SABCA). The tournament was organized to aid Sports Council in its sponsorship of two Cleveland basketball teams that compete in local league play.

Christopher Hargrave, Sports Council president, coordinated the event with assistance from the rest of the council and members of SABCA. Their efforts met with success as eight teams of three paid $40 per team to participate in the double elimination format. Standard rules applied, and co-ed teams were accepted. The fee covered the play for each team, prizes for the top two finishers, and a barbecue lunch at the conclusion of the tournament.
By the end of the day, the team of Andrew Brugman, Sean Smith and Mike Vander Veen took home top honors after compiling a 5-1 record during the tournament. Overall, the day was one to remember for many things, including good weather, good fun and a positive response from those who took part.
“This event was cosponsored by SABCA, and I want to thank them for their help in the tournament’s success,” Hargrave said. “Travis Rogers and Kelly Callaway both assisted as referees for the day. As a whole, I think it brought people together who wouldn’t otherwise meet here at Cleveland, and hopefully in the future, we have an even larger turnout!”
Although not the first event of its kind organized for Clevelanders, it appears it won’t be the last. Hargrave hopes to use the positive energy from this event as a catalyst for future competitions.