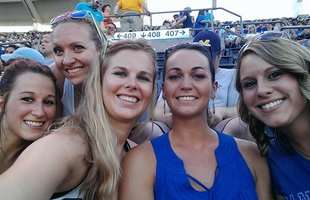 Cleveland Night at the Royals a hit once again

Conversations about professional sports in Kansas City usually revolve around the Kansas City Chiefs. With the 1985 World Series Championship a distant memory, and multiple years of futility since, the Kansas City Royals are generally an after thought. Until this year, that is. By June 20, the club was back at home, just two days removed from a ten-game winning streak. They faced the Seattle Mariners in front of a sold-out crowd that included more than 550 Clevelanders.

Held annually, Cleveland Night at the Royals is always the most popular social event of the summer. It offers students the opportunity to relax and unwind from the stress of their studies, bringing members from all trimesters together to socialize. Tickets were available at a reduced rate and included a tailgate barbecue meal prepared by Brancato’s Catering.
Jalonna Bowie, director of Student Services, coordinated the gathering and was in charge of ticket sales for the College. After placing an initial ticket order of 450, an additional 125 tickets were ordered to meet the demand.
“Cleveland Night at the Royals is one of the biggest events of the year, so it’s always well-attended,” Bowie said. “Along with that, the Royals are having one of the best years in recent memory, so that really got people fired up for the game.”
Cleveland student Paul Fay said there was much to enjoy about the evening, including the mid-game run by the Royals that got them back into the game, as well as the fireworks that followed. Fay said the Cleveland events are fun for a variety of reasons, but primarily because they are economical for those on a budget.
“They allow students to spend time with family and friends at a discounted price,” Fay said. “With inflation, the price of tuition going up and student loan amounts going down, it’s a good thing to have discounted tickets to fun activities. It’s also good to see professors outside of their normal routine. And free food is always a great thing.”
Fellow student, Seth Cordell echoed similar thoughts, saying that events like the Royals game are a special treat for those who want to socialize with other Clevelanders at Kansas City sporting events, but are watching their spending.
“It is important to have opportunities to socialize with students outside of class,” Cordell said. “With money and time being tight, it’s great that the College helps us out with events like the Royals, Chiefs and Mavericks games. The catering is also a huge improvement on the usual student diet.”
A special guest at the tailgate party was Dr. Patrick Hammond ’97, who visited the Cleveland tent just prior to the game. Hammond, who is the chiropractic consultant for the Royals, was leaving the stadium after providing treatment to members of the team.
Even with a spirited crowd offering their support, the hometown team couldn’t secure the win, losing to the Mariners 7-5. And although it was a loss for the Royals, the event was a win for the Clevelanders in attendance who came away with memories of a great night at the ballpark.