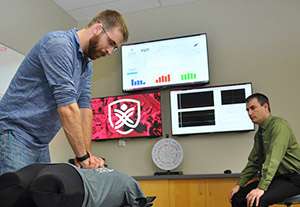 Students attending Cleveland University-Kansas City’s (CUKC) College of Chiropractic are now using an innovative piece of equipment that is redefining the landscape of chiropractic education. Called “Force Sensing Table Technology™” (FSTT), it is an adjusting table that electronically monitors the amount of force applied by the user during a chiropractic adjustment. The data is captured by the table and displayed instantaneously on monitors as a force-time curve. The information can then be used as a teaching aid to instruct student interns on the proper amount of force needed for each manual adjustment.

Developed by Canadian Memorial Chiropractic College, the therapeutic table utilizes integrated force plate technology to take precise measurements of force generated by the user during an adjustment. It measures in three different directions, including floor to ceiling, from head to toe and from side to side on the table. It also calculates the amount of force used prior to thrust, as well as the speed and the direction of the adjustment. It can also capture video of the user for a visual reference to compare to their performance analytics displayed on the monitors.

Dr. Jon Wilson, assistant dean of chiropractic education at CUKC, said Cleveland is only the fourth institution in the United States to purchase the FSTT™. He is enthusiastic about the impact it will have on Cleveland students and ultimately, the profession as a whole.

“This technology has the opportunity to not only revolutionize chiropractic education, but it also offers a chance to begin studying how force affects patient care,” Wilson said. “If I know a certain level of force is appropriate and effective for treating a pediatric patient with a given condition, say low back pain, and I have been trained using a force table to accurately reproduce those forces, the patient wins. Without this training, it is left to the experience of the individual provider to determine the correct level of force.”

Wilson went on to say that the variation in force used by different chiropractors offers an explanation about why some practitioners have more success than others when treating certain types of patient conditions.

For CUKC students, the introduction of this new equipment was enlightening. It radically altered their training by giving them a better understanding of their actions. They can now better gauge what they must demand from themselves to be effective for their patients.

“The long-term advantage of this technology, beyond the immediate educational benefits, is that our graduates will have a wide range of forces available to them in practice, and will be able to know accurately how much force they are using,” Wilson said. “If future research shows ideal levels of force for certain populations or conditions, our graduates will be competent and confident in their ability to reproduce those forces.”

From a student perspective, the FSTT™ enhances the way one prepares for their career. Delivering a quality adjustment with the appropriate application of force is the key to success in chiropractic. This force-sensing technology allows students to better train themselves to achieve that success.

“The amount of information you can get from using the table is amazing,” Cleveland student, Savannah Howell, said. “It can give you data on several aspects of an adjustment like preload, peak force, speed, and vectors of thrust. The instant feedback allows you to tweak and fine tune your technique in real time.”

Fellow student Taylor Frederick said the FSTT™ allows student interns to gain a better understanding of how the adjustment feels to those receiving treatment.

“This knowledge is beneficial because students will know how to control their technique to suit whatever patient comes into their office,” Frederick said. “By having this control it will help students become more confident in their role as the doctor. Expediting the process of reaching that confidence is nothing short of invaluable.”

Wilson has been teaching adjusting technique to students at CUKC for nearly five years. He said the FSTT™ technology is an equalizer in the classroom, because the high-speed video feedback can capture what the human eye may miss. As a result, it can answer many of the questions regarding the training and preparation of student interns.

“Technique instructors frequently try to improve a student’s ability to adjust using various strategies,” Wilson said. “In the past, it has sometimes been difficult to determine how effective those strategies are. With the force table, we are able to see in real time if the strategies we use are working.”

This enhanced view of a student intern’s abilities will help to present a more accurate representation of a student’s level of skill. The FSTT™ will reveal where the intern is proficient, and where additional training is needed. This advanced instruction will help CUKC to graduate the most competent practitioners in the profession.

“I believe we put out some of the best manual adjustors in the profession now, and I only see our students’ mastery of the chiropractic art increasing in the future,” Wilson said. “CUKC strives to be at the forefront of using technology in our educational program to prepare students for the world that will exist when they practice. This was demonstrated in the past when we were one of the early adopters of electronic health records, and is being demonstrated again through our use of the force table technology.”

The table arrived on campus during the spring term and was ready for instructional use by students in March. Cleveland University-Kansas City has already taken steps to incorporate the table into the doctor of chiropractic program.