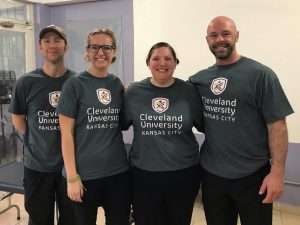 Three members of the Cleveland Christian Club (CCC) at Cleveland University-Kansas City (CUKC) joined the Christian Chiropractic Association (CCA) for a mission trip to the Dominican Republic during spring 2020. The trip took place March 14-20 and allowed club members to serve those in need with both hands and heart. In addition, the Clevelanders were able to share their message of Christian faith with local residents.

This mission of mercy was made possible through the efforts of CCA, who coordinated the trip and invited CCC members to make the journey. A collaborative effort was made between CCA and CUKC to assist with funding. Clevelanders who attended were CCC club president, Robert Coty Spraggs, along with Elizabeth Cerny, and Matt Burton. Joining the group were Dr. Erin Stubblefield, assistant professor at CUKC, and Dr. Mark Ford, representing CCA.

After extensive planning and preparation, the group traveled to the beach town of Sosúa in the Puerto Plata province of the Dominican Republic. In the city of 50,000 residents, they provided free chiropractic care to needy residents under the supervision of Stubblefield and Ford. In addition to their physical needs, the students also ministered the gospel to residents seeking spiritual solace.

Spraggs said the trip was an enlightening experience for him.

“It was eye-opening to see how much suffering goes on in an area that’s filled with tourism,” Spraggs said. “We stayed at a resort that was very nice, but we did travel to more remote areas that were very impoverished, where we treated at free clinics.”

Although he has traveled extensively outside the U.S., Spraggs never got to know any of the local people he encountered until his trip to Sosúa. He noted that the cultural differences were readily apparent, but most notable was the economic distress of those who needed chiropractic care. It was a reminder of exactly why they wanted to go.

“Trips like this matter because these people are born into situations and environments in which change can be nearly impossible,” Spraggs said. “There was only one chiropractor in the town, and he charged a fee that was far too high for commoners to go and see him. This mission trip allowed people to see doctors (and student interns) free of charge, and to have their problems addressed.”

Moved by the abject poverty they witnessed, the Clevelanders took additional steps to help residents of the area. They started a GoFundMe page and sought help from family, friends, and others who wanted to offer support. Many did, including several CUKC alumni and current faculty members. As a result, CCC was able to make a $1,000 donation to help the area they served during their trip.

“It went to a group of individuals (volunteers) who run two different pregnancy clinics,” Spraggs said. “One is located in Bella Vista, and the other is in Sosúa. They use the funds to help operate, but also to buy diapers, medication, food, and supplies for impoverished mothers.”

Those in Sosúa, and the surrounding area lacked much. As result, the group from CUKC did all they could while they were there, giving of their mind, body, and spirit to make a difference. And, they hope to do more of the same in the future.

“Our hope is to send members from the club on every mission trip that becomes available to us,” Spraggs said. “It’s a great cause, and we helped a lot of people while we were there. We plan on doing this annually, if not more. It’s up to the University and CCA, but the club would love to be a part of it.”