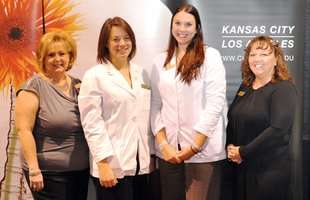 In an effort that was both promotional and educational, Cleveland University-Kansas City served as the event sponsor for the Overland Park Business-2-Business Expo on Oct. 19. Held at the Overland Park Convention Center, the annual event is a showcase for companies to share their products and services with the general public and potential clients. More than 100 local entities were present at the event, which lasted from 11:30 a.m. to 6:30 p.m.

As the sponsor for the expo, the university had a large booth in the center of the display hall that allowed members of the public to learn more about the College and its offerings. Melissa Denton, director of admissions, and Linda Gerdes, community outreach representative, were present at the booth to answer questions and provide information to visitors. Also in attendance were interns from the Chiropractic Health Center, who shared health solutions with members of the public.

The expo began with a marketing seminar for businesses titled “How to Develop a Measurable Social Media.” The presentation was followed by an open floor for booth visitation during the afternoon, and concluded with a networking reception from 4:30-6:30 p.m.

This was the second year CUKC sponsored the business gathering, and the second time in as many years to have received the award for “Booth of the Year.”