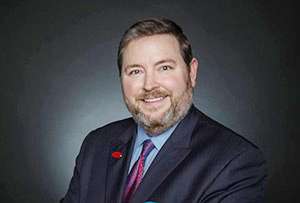 Another Cleveland University-Kansas City (CUKC) alumnus is achieving excellence in their service to the chiropractic profession. Dr. John C. Nab was recently named treasurer of the National Board of Chiropractic Examiners (NBCE) for 2019. Nab, a 1994 graduate of CUKC, was elected to an at-large position on the NBCE board in 2018. He will continue in that role, along with fulfilling the additional duties of treasurer.

Nab served his alma mater as a member of the CUKC Board of Trustees and was a vice president at the University before accepting a position with nutrition company, Standard Process.

“Dr. Nab is a tremendous asset to whomever he serves in the profession,” Dr. Carl S. Cleveland III, CUKC president, said. “I am pleased that he was elected to serve in this important role for NBCE, and I wish him tremendous success in this new office during the coming year.”

As part of the board’s effort to facilitate communication with the various doctor of chiropractic (D.C.) programs, Nab was also appointed the NBCE liaison to chiropractic institutions. He will visit each of the D.C. program campuses and maintain relationships with student body leaders and institutional leadership. Additionally, he will be available to respond to questions and concerns from D.C. program leadership regarding the services and policies of the board.

Officers are elected during the annual meeting of the NBCE. This year’s gathering was held in San Diego. Officers serving with Nab on the executive committee in the coming year: Dr. Daniel Côté, president; Dr. LeRoy Otto, vice president; and Dr. Michael Fedorczyk, secretary.

The NBCE develops, administers, and scores legally defensible, standardized examinations for candidates seeking chiropractic licensure throughout the United States and in several foreign countries. Its mission is to ensure professional competency through excellence in testing. Established in 1963, the organization is headquartered in Greeley, Colo.