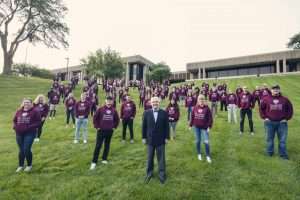 The Fall 2020 enrollment at Cleveland University-Kansas City (CUKC) was historic for the institution’s College of Chiropractic, as 103 students began the Doctor of Chiropractic (D.C.) degree program. It is the largest class of chiropractic students to start the program in 38 years.

As a group, the students are academically sound and ready for the challenging curriculum that lies ahead over the next three-plus years. With incoming students hailing from California to West Virginia, the group represents a geographic cross-section of the nation. Some made the trek to CUKC because of its solid scores on chiropractic board exams; others found the unmatched quality of life in the heartland was a good fit for them.

The record enrollment was made possible by the collective efforts of many at the University. Melissa Denton, director of admissions at CUKC, was pleased with the large class size, but she wasn’t surprised, since the interest in chiropractic continues to rise.

“Fall enrollment is consistently growing as more college graduates enroll in doctorate programs immediately after receiving their undergraduate degrees in the spring,” Denton said. “Students are beginning to realize that the Doctor of Chiropractic degree is attractive to those seeking to help others stay healthy. People want to be proactive in maintaining proper health, and chiropractic is an affordable healthcare option that is essential in achieving that goal.”

Denton said the key to the University’s success is the tireless efforts of her admissions team. They consistently recruit quality students who will learn and then lead in their field. After they arrive on campus, that concept is reinforced in the classroom throughout the curriculum.

“The approach of our faculty to teach and graduate top doctors is helping CUKC to be the desired institution for success in the chiropractic educational arena,” Denton said. “My team helps to facilitate that process and spreads the word to the general population about CUKC. They work nights and weekends; they answer early morning calls and reply to texts late at night; they make themselves available 24/7,” Denton said.

Denton said a supportive administration is also extremely helpful in university admissions. Dr. Carl S. Cleveland III, CUKC president, takes an active role in building relationships with all campus guests. It’s not uncommon for him to step away from work in his office to speak with a prospective student.

“It helps to have a president that is truly vested in admissions and the recruitment of students,” Denton said. “Some of my colleagues (at other schools) rarely see their president on campus tours or out recruiting, and Dr. Cleveland meets nearly every student that tours campus. He attends recruitment events and open houses, and I know his schedule is hectic, but he still finds time to greet students.”

Dr. Alex Bach, vice president of enrollment management at CUKC, said the increase in students during the fall term was not unexpected. It was the result of a commitment made to finding students who were passionate about chiropractic and felt CUKC was a good fit for them.

“The admissions team works extremely hard to fill every class for every start,” Bach said. “We always try to provide opportunities for the largest number of students we can. With that in mind, and with current restrictions, we had to limit the number of students we accepted for the fall.”

Bach joined the University in Spring 2016. Since his arrival, he has refined the admissions team’s strategy and those of other departments who are integral to the enrollment process. Numbers have begun to increase, and he is pleased to see their efforts yield positive results.

“I’m extremely proud of the admissions staff and everyone at CUKC that worked so hard to bring in this D.C. class,” Bach said. “It’s an indication that our efforts to increase the visibility of the University and the chiropractic profession these last four years, and over nearly a century as an institution, are working. And while we still have work to do, we recognize and celebrate this accomplishment.”