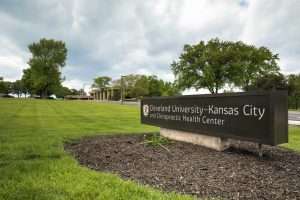 Maintaining its commitment to invest in technology for chiropractic education, Cleveland University-Kansas City (CUKC) recently announced the purchase of two more force-sensing tables for its Technique Simulation Lab. That brings the total number of the tables in use at the University to four. At this time, the College of Chiropractic at CUKC is the only chiropractic program in the nation to have four force-sensing tables available to its students.

Known as “Force Sensing Table Technology™” (FSTT®) the tables electronically monitor the amount of force applied by the user during a chiropractic adjustment. The data is captured by the table and displayed instantaneously on monitors as a force-time curve. The information can then be used as a teaching aid to instruct student interns on the proper amount of force needed for each manual adjustment.

The force-sensing tables have become an invaluable part of the learning process at CUKC because of the impact they have in the technique lab. They offer a detailed report of what happens during the merger between chiropractic adjusting technique and innovation. The result is an analysis that offers a level of specificity that can’t be equaled by traditional instruction. 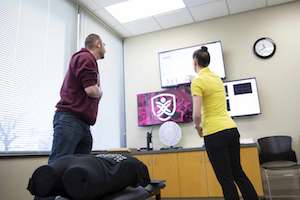 When CUKC purchased its first table in 2017, Dr. Jon Wilson, dean of the college of chiropractic, called it a “game changer.” FSTT® was such a powerful learning tool for students, the University acquired a second table in 2018. Now, with the addition of two more tables, Wilson continues to believe the equipment in the Technique Simulation Lab has changed the game when it comes to learning chiropractic technique.

“There is no replacement for real-time, objective feedback when developing any psychomotor skill,” Wilson said. “Students have a greater ability to modulate force, whether during the pre-load or build up to the adjustive thrust, or the thrust itself. Being able to modulate across a wide range of forces prepares CUKC graduates to fit the needs of each patient, and I can’t think of a more important outcome than future patient satisfaction.”

They have had a dramatic effect on CUKC students. Prior to 2017, they had to rely on their own skill set and the guidance of instructors. FSTT® makes it possible for them to practice their adjusting technique using next-level equipment that yields such specific data, it helps students achieve success more quickly than ever before.

CUKC student, Justin Akiyama, believes the technology has been an integral part of his development.

“I think the force-sensing tables are extremely important,” Akiyama said. “Going to the lab allowed me to practice my various forces of preloads and thrusts, and taught me not to ‘dip.’ As my skills progressed into adjustments from palpation, the force lab was a great place to use biomechanical optimization. Because this is what I want to do for the rest of my life, being able to do it in an efficient, and non-degenerative manner is phenomenal.”

Recognizing the value of FSTT® to educate the next generation of chiropractors, the University chose to make the tables a key part of the educational experience. Doubling the number of tables, will enhance that experience for even more students.

“The University’s continued investment in simulation technology shows not only dedication to using innovative technology in education, but also a strong commitment to producing the best doctors in the area of performing spinal adjustments,” Wilson said. “CUKC recognizes the importance of the manual adjustment to the profession and our future patients, and is cognizant of the fact that students today learn in different ways than they may have in the past.”

Wilson went on to say that doubling the number of tables is a strategic move, in spite of the current circumstances. Although the pandemic has lowered the capacity of all rooms to protect the campus community, students can still sign up in the lab to work with an experienced clinician on the tables. Now, the University can offer twice as many available opportunities.

Creating more chances for innovative learning is just another way that CUKC is pursuing next-level education for its students. However, to benefit from advancements in technology requires an investment to avoid being left behind. A strong financial commitment to force-sensing tables by the administration and friends of the University, has allowed CUKC to remain on the cutting edge of technique instruction.

“The program has benefited from private donor investment in the Technique Simulation Lab, and by the program placing a priority on providing students the technology they need to succeed,” Wilson said. “I think field practitioners recognize the value, and like to invest in the future of the profession they love.”