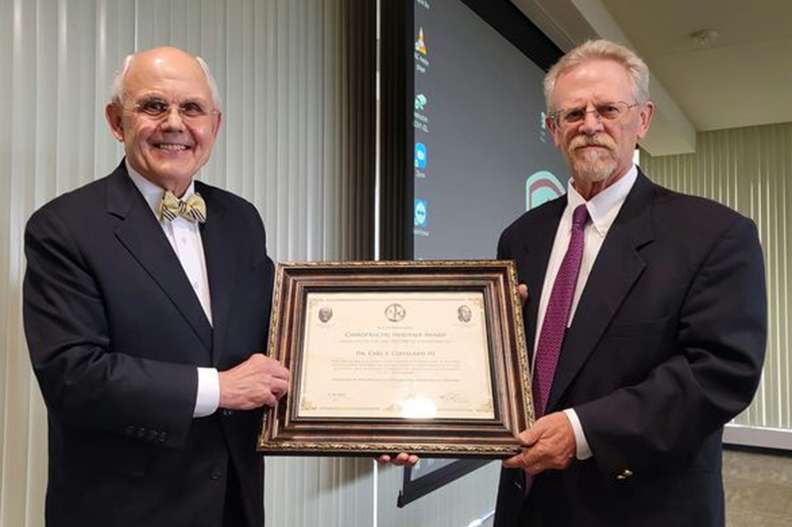 The president of Cleveland University-Kansas City (CUKC), Dr. Carl S. Cleveland III, was recently recognized for his life’s work at the 41st Annual Conference of the Association for the History of Chiropractic (AHC) held June 18 on the CUKC campus. Cleveland was the recipient of the Lee-Homewood Chiropractic Heritage Award, which honors living pioneers who have made outstanding contributions to the chiropractic profession. The award included a certificate and a Lifetime Membership to the AHC.

The ceremony was held at a dinner on the CUKC campus following the conference. Dr. Edward McKenzie, vice president of the AHC, former CUKC Board of Trustees member, and current CUKC faculty member, presented the award to his long-time colleague. Video tributes from Dr. Dennis Marchiori, chancellor of Palmer College, and Dr. Gerry Clum, president emeritus of Life West University were shared with those in attendance. Dr. Ashley Cleveland, former provost of CUKC, and a fifth-generation chiropractor also spoke about Dr. Cleveland III’s impact on the chiropractic profession.

Additional recognition came at the beginning of the conference from current AHC President Dr. Frank Bemis, who presented an award to Cleveland III celebrating 2022 as the centennial year of the University.