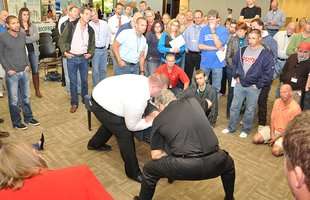 More than 650 alumni, students and friends of Cleveland Chiropractic College arrived on campus Oct. 11-13 for Homecoming 2013. The theme for this year’s event was “The Road Ahead,” which set the stage for attendees to celebrate the past with an eye on embracing the future. Clevelanders shared the weekend with members of the Kansas Chiropractic Association (KCA), who held their fall convention in conjunction with the homecoming festivities.

The weekend was infused with positive energy from the guest speakers and alumni, as well as students present throughout the weekend. Students were able to mingle with current practitioners, as well as view the latest products and services from more than 20 on-site vendors. Alums were able to seek out classmates and old friends, while also securing Continuing Education Units (CEU) from a host of scholars and professionals.
Coordinator for Homecoming 2013 was Sarah Hilliard, director of alumni services. She was gratified that the weekend of education and fellowship went so smoothly, and that all seemed to enjoy their time on campus.
“Homecoming is a great way to have fun, while earning CEU hours at the various sessions we offer, ” Hilliard said. “It was a weekend full of education, energy and excitement.”
Following a welcome by Dr. Carl S. Cleveland III, president, the crowd heard from keynote speaker, Dr. Malik Slosberg. Other presenters throughout the weekend included Kathy Mills Chang, Dr. Richard Day ’08, Dr. Jeff Tucker, Dr. Mitch Mally, Dr. Mary Warren, Dr. Karen Doyle, Kent Mangelson, Dr. Jeff Spencer ’88 and Dr. Michael Perusich ’99.
On Friday evening, a reunion doctors celebration was held in the Dining Hall. There, members of the reunion classes gathered to socialize and special recognition was given to Dr. Lois Webb ’63, who was celebrating her 50-year reunion. The event was touched with sadness, as the College learned of the unexpected death of distinguished alumnus and friend, Dr. Richard Yennie. A 1953 graduate of the College, Yennie — along with three classmates — was to be recognized by the Alumni Association for his 60-year reunion. Dr. Cleveland indicated that the celebratory event went on as planned, because Yennie would have wanted it that way. To honor the man, his life and his contributions to the profession, Cleveland reflected on the loss of his friend and asked those gathered for a moment of silence in his honor.
The accolades continued during a Saturday alumni luncheon as Dr. Carlisle DeAtley ’66 received an Ambassador Society plaque in recognition of his contributions to the College. Saturday evening was the Cleveland Awards Reception, where Dr. Kay Carver ’71 was named “Alum of the Year.” Carver has taken an active role with the College and alumni affairs since graduation, including serving for several years on the alumni board. The KCA also awarded one of its highest honors to a Cleveland alum, as Dr. Thad Schneider ’07 was named KCA “Young Doctor of the Year.”
Once again honoring the theme, the Cleveland Foundation distributed 47 scholarship awards to the next generation of chiropractors that will travel the road ahead in the very near future. The awards helped to make that journey possible for the future practitioners.
Scholarship winners for the 2013 event included: Brian Asbury, Kendrea Bensel, Angela Boyazis, Regan Boyer, Colleen Burmeister, Jordan Butler, Jessica Campbell, Justin Cook, Dean Dierksen, Leo Dodier III, Brittany Donn, Derrick Dube, Heather Fay, Paul Fay, Alan Fecher, Jerod Franck, Trevor Hampton, Christopher Hargrave, Sam Harwood, Alex Hemme, Danielle Hill, Britton Horton, Hollee Kirchner, Kate Lakin, Kaitlin LaVigne, Kelli Meier, Dustin Meyer, Christin Phillips, Ashton Popple, Philip Rodger, Lindsey Rovenstine, Angie Segovia, Caleb Spreiter, Kayla Stoltenberg, Megan Sullivan, Timothy Sullivan, Eric Thibault, Christine Thomas, Kara Thomas, Nathan Thomas, Melissa Volk, Christopher Voll, Eric Walker, Lindsey Warta, Jennifer Watts, Brock Wells and Jason Williams.
Dr. Clark Beckley, vice president of campus and alumni relations, was pleased with Homecoming 2013 and commended those who contributed to its success.
“I would just like to recognize, congratulate and thank everyone for making this an amazing weekend,” Beckley said. “The positive energy was just palpable all weekend, but especially when we had more than 650 people on campus on Friday.”
Homecoming 2014 is scheduled for Oct. 10-12, 2014. The next Cleveland alumni event will be held in Las Vegas Feb. 28-March 2. Stay tuned to cleveland.edu for details.