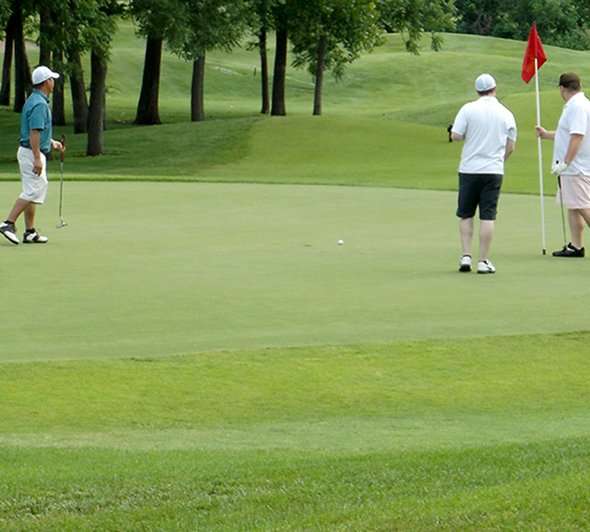 Sunny skies and a near-record turnout set the stage for a highly successful event as the Student American Chiropractic Association (SACA) at Cleveland Chiropractic College sponsored its 5th Annual Golf Tournament on June 28. Held at Deer Creek Golf Club in Overland Park, the tournament had 15 teams and 60 golfers participating.

SACA member Jessica Loveless helped coordinate the event. She said all the hard work SACA put into the event paid off in more ways than one.

“We’ve received a lot of positive feedback! Everyone enjoyed a fun day with friends and colleagues playing golf,” Loveless said. “We were lucky to have fantastic weather this year, as well as great prizes and Deer Creek provided a great venue. As with the past several tournaments, the 5th annual installment was a great success in contributing to our upcoming conference. We were excited to see an increase in participation this year, and we are already starting to plan next year’s event. Overall, everyone had a great time!”
Proceeds from the tournament each year are applied in full to help Cleveland students fund their trip to the annual National Chiropractic Legislative Conference (NCLC), which is held in Washington, D.C., each February. NCLC is the primary conference for SACA, according to Loveless.
“We encourage as many students as possible to attend,” she said. “All proceeds from the golf tournament, as well as any other related fundraisers, provide scholarships for Cleveland’s chiropractic students to help subsidize their trip to NCLC.”
Placing first in the tournament was a team comprised of Kaleb Newman, TJ Morris, Bo Dykes and Tony David. Winner of the longest drive contest was Matt Jones and the top prize in the closest-to-the-pin competition went to Chris Miller. Three other mini-contests were held, and the winners were: Mike Jones, longest putt; Jim Murray, putting contest; and Mike Jones and Troy Hayes, “Sink the Battleship” special event.
The runners-up in the tournament were Chase Vifquain, Charles Vifquain, Darren Spalding and Mike Jones. They finished second in an extremely competitive tournament, which involved a score-card playoff to determine their fate.
All in all, Loveless said this year’s tournament eclipsed those before it in many ways. Besides its function as an important fundraiser, she said it, like other social events, provides students with a chance to break away from their academic rigors and be entertained.
“With a heavy school load, Cleveland Chiropractic-related events like our SACA golf tournament give the students time to relax and enjoy socializing with their classmates, friends and professors,” Loveless said. “The institution shows great support to its students and is willing to help throughout the entire process, which encourages an increase in morale.”
Loveless said SACA spent several months organizing the tournament. Much of their time was spent fundraising for corporate, registration and raffle sponsors. In all, SACA acquired about 50 donations from 30 sponsors. The rest of SACA’s efforts involved creating signage and marketing materials, preparing golfer grab-bags and planning the day-of events.
The fruits of their labor will come to fruition as they apply the funds raised to attend next year’s NCLC to be held Feb. 25-28, 2015, at the Hyatt Regency on Capitol Hill in Washington, D.C.