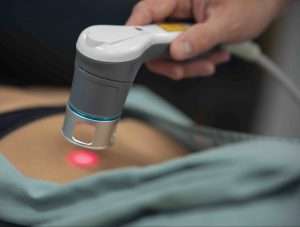 The United States has a capable and dedicated workforce able to provide goods and services to rival any other nation. But it turns out its most significant competitor may not live on foreign soil. Increasingly, the greatest challenge to the American worker is back pain. To combat this, some students in the College of Chiropractic at Cleveland University-Kansas City (CUKC) are using a Class 4 laser in conjunction with traditional chiropractic spinal manipulation to achieve better results for their patients.

According to a study in the March 2020, Journal of the American Medical Association, from 1996-2016, it was low back pain and neck pain that dominated health care spending, with an estimated $134.5 billion. Of that amount, most was paid by private insurance and direct, out-of-pocket payments. Coming in a close second were other musculoskeletal disorders, with estimated spending of more than $128.9 billion.

With such a massive financial impact made by these musculoskeletal conditions, it may mean that treatment methodologies need to be re-evaluated. Exploring other avenues may lead to a more successful outcome, and stem the rising tide of that spending. Laser treatment, used in conjunction with chiropractic care, may be the key to providing more beneficial treatment to those suffering from back pain issues.

The 2017 American College of Physicians low back guideline recommended that patients with chronic low back pain should initially pursue nonpharmacologic treatment options. Among the suggestions offered were the use of both low-level laser therapy, and spinal manipulation as non-drug, non-surgical interventions.

Chiropractors commonly assess and intervene with an emphasis on a manual manipulation with spine-related pain. A best practice approach involves obtaining a detailed history, physical examination, and choosing an evidence-based trial of care, typically involving a manual therapy approach including, when appropriate, chiropractic spinal manipulation, therapeutic modalities, and exercise and rehabilitation recommendations. Chiropractors will obtain imaging or other diagnostic tests when appropriate, and will recommend consults with a variety of medical providers if red-flags are present or if progressive neurologic loss is found.

“The active-care focus of a doctor of chiropractic involves the promotion of conservative, non-drug approaches to promote and improve movement, with a focus on prevention of the use of opioids, and use of manual therapy and exercise recommendation when possible,” CUKC Director of Research, Dr. Mark Pfefer said. “Sometimes patients present with severe pain, and there is evidence that adjunctive use of low-level lasers combined with other manual therapy approaches may have improved pain reduction effects.”

The use of lasers or, photobiomodulation, in treatment has become more commonplace in the last two decades. Clinical photobiomodulation using low-level laser was approved by the Food and Drug Administration (FDA) in the early 2000s for select conditions, including carpal tunnel syndrome, as well as shoulder and neck pain. The more powerful Class 4 laser received FDA approval in 2003 for the relief of muscle and joint pain. Since that time, it has developed a substantial following, especially among athletes, both at the amateur and professional levels. The use of photobiomodulation treatment using a laser in conjunction with chiropractic spinal manipulation, may be a positive step for those seeking a way to alleviate pain without drugs.

All light is composed of photons, which are packets of light energy in the form of waves. Photons stimulate chromophores in a process known as photobiomodulation. The stimulation of chromophores results in beneficial therapeutic outcomes, such as pain relief, accelerated wound healing, immunomodulation, tissue regeneration, muscle relaxation, and local vasodilation.

“Most therapeutic agents, such as ice, heat, ultrasound, and electrotherapy, can decrease pain and, if used properly, can create an ideal healing environment for the tissues to heal at their optimal rate,” McIntosh said. “The cytochrome c oxidase in the mitochondrial respiratory chain is a primary chromophore. Stimulation of this chromophore increases the production of ATP by the cell. Increased ATP, which functions as the energy currency for cells, leads to accelerated healing of the cells from the inside out.”

According to the MedCrave Online Journal of Orthopedics & Rheumatology, “After more than 4,000 studies on pub.med.gov, it can be concluded that the majority of laboratory and clinical studies have demonstrated that LLLT has a positive effect on acute and chronic musculoskeletal pain.” It continued its assessment saying, “The overall positive clinical studies, in addition to strong pre-clinical studies, should provide confidence that photobiomodulation using a laser may be beneficial for many individuals suffering from musculoskeletal pain.”

As for laser use by chiropractors nationwide, a 2015 survey by the National Board of Chiropractic Examiners found laser treatment is incorporated in the practices of nearly a quarter of chiropractors in the United States. But it continues to gain recognition based on emerging evidence in the last several years that demonstrates improvements in pain and tissue healing. Its use, along with the traditional chiropractic adjustment, could play a substantial role in the future care of those suffering from musculoskeletal conditions.

A Class 4 laser has been in use in the Cleveland University-Kansas City Health Center for several years. Teaching faculty recently published a review and case study of potential benefits in pain and disability in a patient with symptoms associated with end-stage arthritis. Pfefer said the early indications are good regarding the benefits of blending the two treatments.

Some who suffer from spine-related pain commonly use prescription medications to manage the pain. Due to the current opioid addiction crisis, a case could be made that a manual therapy approach, used prudently, could provide significant benefits. Further, research in the March 6, 2020 issue of Pain Medicine demonstrates that chiropractic represents a promising, non-pharmacological alternative to opioids.

Chiropractic students at CUKC who receive laser training will be able to offer a dual approach to treatment, with a focus on reducing pain and improving joint function.