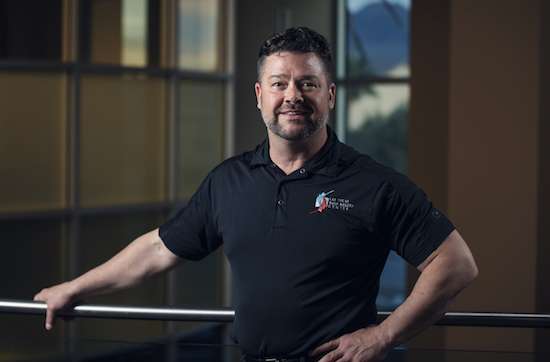 Finding the right career is sometimes difficult. And while the search can be frustrating, the dark days of our professional difficulties can occasionally be illuminated by new opportunities. And if we are bold enough to act on them, we can alter the course of our lives. That’s precisely what Dr. Jon Petrick did, and he found a career he loves.

After a car accident in the early 1990s left him with chronic pain, Jon Petrick was referred to numerous doctors, but no treatments they offered were effective for him. With no relief in sight, a pain-free life seemed to be only a distant dream. A friend suggested that he see a chiropractor, Dr. James Adkins.

“I had been everywhere, I had done everything, and I was frustrated to the point where I really didn’t have much faith in where I was being sent,” Petrick said. “But I was desperate, and desperation does great things. I finally made an appointment to see him.”

From that moment on, both personally and professionally, his life was never the same. All of the previous attempts to help him by other physicians were left in the dust. Adkins began a treatment regimen, and Petrick began to improve.

“Within a very short time after seeing him, I started to notice a lot of the physical problems I was having started to go away, the headaches, the neck pain, even the numbness and tingling I was experiencing in my right arm,” Petrick said. “All that started to dissipate.”

While the treatment he received from Adkins was favorable for his health, it was the treatment the doctor received from his patients that stood out to Petrick. They were all so grateful for his care; many hugged him before they left the office. After witnessing this behavior on several occasions, Petrick soon found himself hugging Adkins after his own office visits.

“I was actually working in a stockbroker program for Bank of America at the time, and I just couldn’t find happiness there,” Petrick said. “I was kind of searching, but didn’t know what I was searching for, and after I had successful treatment with him, and I saw how much his patients loved and adored him. Obviously, there was a great deal of success associated with that – I just said, ‘… That’s exactly what I want to do.’”

It was a revelation for Petrick, but he needed to know more. He visited Adkins at his office and expressed his newfound desire to become a chiropractor.

“I remember (Adkins) shutting the door and saying, ‘Buckle up!’” Petrick said. “And at that point, he had no more patients scheduled, so we spent about four hours in discussion, and I left the office that day knowing with 100% certainty what I needed to do.”

Adkins, a 1992 graduate of the College of Chiropractic at Cleveland University-Kansas City (CUKC), suggested that Petrick choose the same institution. Within four months, Petrick had moved from Phoenix to Kansas City and was starting his chiropractic education.

The chiropractic curriculum is challenging enough on its own, but Petrick was also fighting dyslexia. But, with good study partners and a supportive University that provided tutoring and other assistance, he unlocked his learning potential.

“I knew I was in for a huge struggle, but the school did everything they could to allow me to be successful under my own power and effort – they got me through,” Petrick said. “Cleveland provided me the foundation and the framework for me to succeed, and I can’t say how truly grateful and blessed that I am.”

After his graduation in 1999, he relocated to Las Vegas, where he opened his practice, Las Vegas Pain Relief Center. He started with a strong desire to serve others, and he made himself available to his city the way many new practitioners do. To become more connected with the people of Las Vegas, he participated in different groups and organizations like the Lions Club, Catholic Charities, Three Square, and others.

Over time, that notion has worked well for him. Although his business endured lean years in the beginning, it flourished over time. Over the last 20 years, he has treated a wide variety of patients, but he’s enjoyed a great deal of professional success and personal fulfillment working with athletes. Since launching his practice, he’s treated thousands of athletes in a variety of sports from the NFL and MLB, to Olympic competitors and members of World Wrestling Entertainment (WWE)

Mixed martial arts was growing in popularity in the early 2000s, and the Ultimate Fighting Championship (UFC) is based in Las Vegas. Petrick treated one of the fighters who was trying to recover from injuries suffered in a motorcycle accident. When Petrick’s treatments were successful, the fighter told his colleagues, and Petrick eventually began treating members of the UFC community. It led to a 12-year relationship with the organization, including making regular appearances on the UFC cable television show providing care to fighters.

Along the way, Petrick decided he wanted to do more to give back to the Las Vegas community, so he started a nonprofit called, “Keep it Simple, Make it Fun.” The organization takes those with disabilities from Down syndrome to veterans who use wheelchairs, and takes them out for nature activities like camping, canoeing, and fishing. It uses nature to lift everyone, both participants and the volunteers.

It was through his philanthropic work that perhaps Petrick’s greatest mission of service was launched. He met a man named Mark, who had suffered a traumatic head injury. He had been in a coma for nine months and had suffered a stroke. He battled seizures and had permanent paralysis on one side of his body.

When Mark was finally released from the hospital, he took steps to rebuild his life. He was able to participate in occasional camping trips and other outdoor activities with Petrick’s group.

“I would take him on our nonprofit camping trips, and he would have fun, and I would see that it was kind of an enjoyment for him because, as sporadic as they were, it was still something that he looked forward to,” Petrick said.

Over two years, Mark became a regular participant on the trips, and Petrick became close to him. So, when he learned the care Mark was receiving at home was borderline neglectful, he made a bold decision. In 2014, he opened his home and took Mark in as a roommate. Mark has lived with Petrick and his 14-year-old daughter since then, and the two men are beyond roommates. Petrick refers to him as a true “brother from another mother.”

Petrick said Mark would remain with him forever, and his extended family has accepted Mark as one of their own. This selfless gesture rescued a friend in need and was the ultimate example of service to others. When people learn about Mark, they often say, “Oh that’s so nice of you to do.” But Petrick refuses to accept praise for his actions.

“To me, it was the only thing to do,” Petrick said.

At this point in his career, Petrick is in a good place. He started in the profession when chiropractic was not as accepted as it is now, but after more than 20 years in practice, he has witnessed a shift in thinking. Not only does the public welcome the more natural approach offered by chiropractic, but it is also now embraced more openly by the entire healthcare community.

The interdisciplinary relationships that many doctors of chiropractic now enjoy with those in the medical field are one of the things Petrick finds most appealing about his practice. It’s gratifying for him to share his sphere of influence with respected members of the medical community.

“I work with orthopedic surgeons and cardiovascular doctors and different types of M.D.s and specialists,” Petrick said. “So for me, it’s the teamwork that’s associated with it, and the evolution of the practice, and what it has become. And I believe there’s never been a better time than right now to be a chiropractic physician. It’s where the trend is going.”

After more than two decades in practice, Petrick has learned much about business, people, and himself. He has helped thousands as a trusted healthcare professional while earning the respect and admiration of his patients. And by making a commitment to his Las Vegas community, he not only found peace, he discovered success.